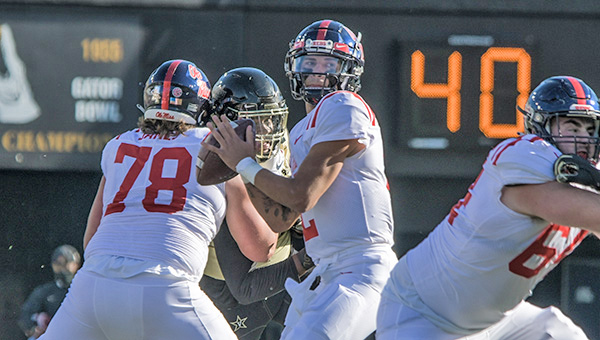 Ole Miss quarterback Matt Corral (2) looks for a receiver Saturday against Vanderbilt. Corral threw for 412 yards and six touchdowns to lead the Rebels to a 54-21 victory. (Ole Miss Athletics)

NASHVILLE, Tenn. — As potent as the Ole Miss offense has been in 2020, it was nearly perfection on Saturday.

Matt Corral completed 31 of 34 passes for 412 yards and six touchdowns, Elijah Moore set a school record with 238 receiving yards and three touchdowns, and the Rebels set several other records in a dominant 54-21 victory over Vanderbilt.

Moore became the only Rebel to have multiple 200-yard receiving games in a single season. He also broke A.J. Brown’s school record for yards in a single game (238) and tied Brown and Laquon Treadwell’s record for receptions in a game (14). Moore’s three touchdown catches made him the first Rebel to score that many since Treadwell in 2015.

“I try not to focus on that, because that’s not the overall goal, that’s just stuff you go to after the game,” Moore said. “It’s a blessing. I thank God, but I just want to win. That’s the best feeling right now is that we won.”

Corral completed his first 19 passes to break Eli Manning’s record for consecutive completions that stood for 19 years. His 91.2 completion percentage is also a school record for a minimum of 30 attempts, and tied the SEC record set by Tennessee’s Joshua Dobbs.

On the ground, Jerrion Ealy rushed for 95 yards on 15 carries but snapped a string of six consecutive games with a rushing touchdown. Henry Parrish Jr. also added 51 yards on seven carries, both career-highs for the true freshman. Snoop Conner had the team’s only rushing touchdown.

In total, the Rebels (2-4) had 641 yards of total offense, just six shy of the program record for an SEC game. The record was set earlier this year against Alabama.

Ole Miss scored touchdowns on eight of its first nine possessions and only punted once, late in the fourth quarter. Corral threw four touchdowns in the first half — three of them to Moore — and the Rebels led 33-14 at halftime.

The Rebels did just that with the offense clicking on all cylinders. Corral ended the first quarter completing a perfect 9-for-9 and throwing for 143 yards. His six touchdowns in the game tied Manning’s schools record, and was the most ever by an Ole Miss quarterback in a non-overtime game.

“I was just taking what they were giving me. I wasn’t really paying attention to that,” Corral said of his hot start. “I was just looking at the play calls — what do I need to do this play? What am I looking for? And just playing it through, staying within the system, and taking what they give me.”

HATTIESBURG (AP) — The third coaching era of the season at Southern Miss did not start off any better than... read more