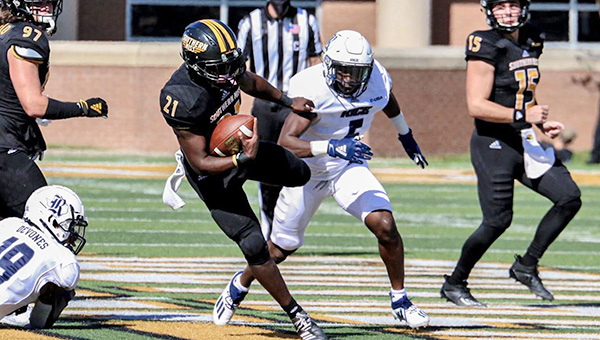 HATTIESBURG (AP) — The third coaching era of the season at Southern Miss did not start off any better than the first two.

Southern Miss was playing its first home game under the leadership of Tim Billings, who is the team’s third head coach this season. He also served as interim coach last week at Liberty when Scotty Walden tested positive for COVID-19, then fully took over a few days later when Walden left to become the head coach at Austin Peay.

“With every change and everything that has happened you could use excuses, but you have the next guy up and he has to be prepared and ready to play,” Billings said. “That was a part of the issues today. We scored six points offensively because we had a lot of issues and changes. Defensively we gave up some big plays early. I thought we played a lot better the second half, but were still not efficient enough yet.”

Collins was 12-of-17 passing for 233 yards and four touchdowns. Trammell finished with seven catches for a career-high 143 yards.

Southern Miss (1-5, 1-2 Conference USA), meanwhile, scored a season-low six points, with its only points coming on a pair of Briggs Bourgeois field goals in the first half.

USM quarterback Jack Abrahama was 12-of-17 passing for 112 yards and one interception, and was replaced by third-string backup Trey Lowe in the second quarter. Southern Miss only threw five passes in the second half.

“A couple of times we tried to throw it and got sacked. He had to scramble a few times. We felt like in the first half we had a decent run game and could move the ball. They offensively kept the ball away from us. That meant we didn’t have many possessions or get much time with it. It was a little of both,” Billings said.

After Collins threw a short pass that Jake Bailey turned into a 72-yard score down the left sideline, the Owls recovered a fumble off a pooch kickoff. On the next play Collins threw a 25-yard score to Trammell to lead 16-0 with 13:58 left in the second quarter.

A fumble recovery set the Owls up at the Southern Miss 17 and a 13-yard pass to Trammell made it a 20-point second quarter for Rice. The third Collins-to-Trammell TD connection came on a 14-yard pass in the fourth quarter.

Juma Otoviano finished with 111 rushing yards on 25 carries for the Owls, who outgained the Golden Eagles 412-269.