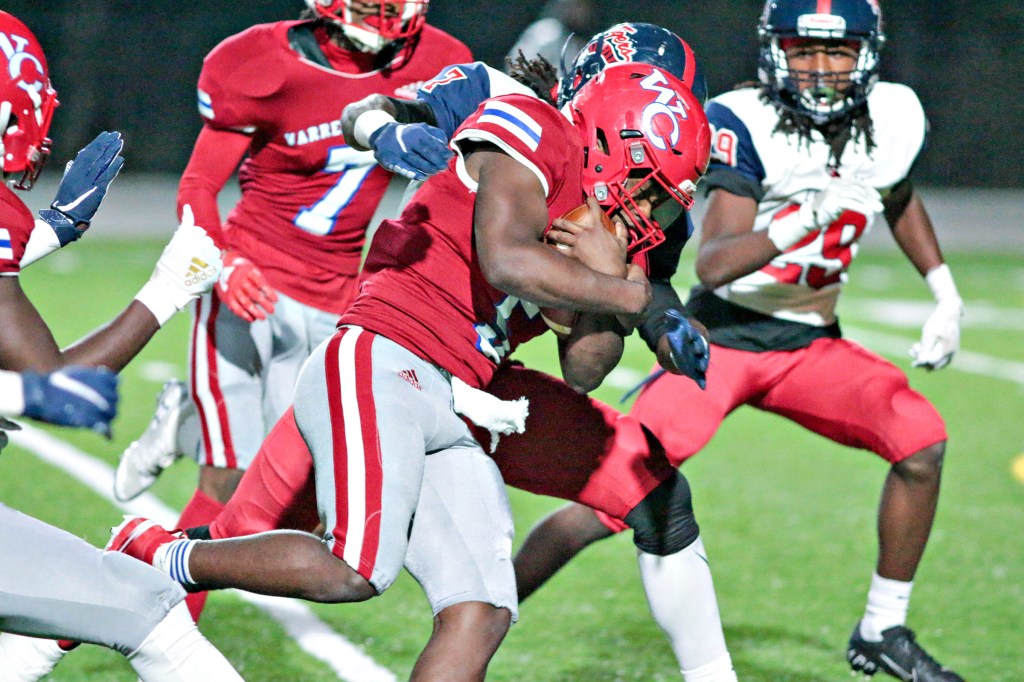 Warren Central vs. South Panola was billed as a slugfest between two Region 2-6A heavyweights and state championship contenders, and it lived up to the hype as a Game of the Year candidate in Mississippi.

That did not make it any easier to swallow for Warren Central when it came out on the wrong end of the final score.

D’mariun Perteet scored on a 2-yard run in the second overtime to tie the game, and then added the two-point conversion run a moment later to give South Panola a 36-35 victory over Warren Central.

Warren Central fought back from a 14-point deficit in the first half, shut out South Panola in the third and fourth quarter, and briefly held the lead in overtime. It just couldn’t finish the job and put the Tigers away.

“You have to make a conscious effort to stay in there and keep fighting. I don’t think we should have lost the game. I think we deserved the game. But that’s the sport we play and the life we live in,” Warren Central coach Josh Morgan said. “We just have to respond the right way. But I’m proud of our fight and our character and our mental toughness.”

The loss was a costly one for Warren Central (7-2, 5-2 Region 2-6A). It could have clinched a home playoff game and given itself at least a share of the Region 2-6A championship with a win. Now it must sit and wait until next Friday night to find out if it’s even in the playoffs.

Four teams are currently tied for second place in Region 2-6A. If Starkville beats Clinton next week, it will be a five-way tie for four playoff spots and chaos will be unleashed as the MHSAA’s tiebreaker system goes to work. Warren Central could conceivably still end up as the region champion when it’s all sorted out, or it could miss the playoffs entirely.

Warren Central, South Panola (8-2, 5-2), Starkville and Madison Central all have two losses in the region. Clinton only has one, and is the only team that controls its destiny. It will win the region title outright if it beats Starkville.

“It’s a bad feeling to be in. I just don’t know,” Morgan said of the uncertainty. “Hopefully we can have an answer sorted out before then. If it does come to a five-way tie, I’m hoping to get a little clarity there. It’s an agonizing wait.”

South Panola would have been eliminated from playoff contention with a loss to the Vikings, and with so much on the line both teams played as if it were already the postseason.

South Panola quarterback David Hubbard completed his first eight passes, including touchdowns of 42 yards to John Blockmon and 65 yards to Cameron Wright in the first quarter to spot the Tigers a 14-0 lead. A 20-yard TD run by Perteet in the second quarter made it 21-7.

Hubbard was 17-of-26 passing for 246 yards in the game, with three touchdowns and one interception. Wright caught six passes for 131 yards and two TDs.

“You just can’t do that. We gifted them two touchdowns very early in the game that came back to put us in a bad situation,” Morgan said.

Warren Central, though, did not fold. Quarterback Kentrick Thompson scored on a 1-yard run with 2:57 left in the first half, and then threw a 47-yard touchdown pass to Tre Hall in the third quarter.
Both defenses stood tall for the last quarter and a half, and the game went into overtime tied at 21.

“The biggest thing was we calmed down. We made a couple of minor adjustments at halftime, but I think it was us coming out playing better and settling down,” Morgan said.

South Panola got the ball first in overtime, and scored on an 18-yard pass from Hubbard to Wright.
Warren Central answered with a 3-yard run by Hall, and then went on top 35-28 when Thompson scored on a 1-yard run to start the second overtime.

After Thompson’s short score, South Panola got its chance to match. Perteet gained eight yards to the 2-yard line on first-and-goal from the 10, then was stuffed on the next two plays. On fourth down, with the season on the line, the sophomore came in motion, took a handoff, and got around the right edge and into the end zone to bring the score to 35-34.

The Tigers then elected to go for two points and the win, and Perteet burst straight through the middle of the line for the walk-off conversion.

“My heart hurts for our guys. Just thinking about them, coaching them, preparing for them, and this is a heartbreaking way to lose a game,” Morgan said. “Somebody had to lose it. It was two teams getting after it and fighting, and it was great to see that out of both teams. I’m very proud of my team. I’m a proud coach right now.”