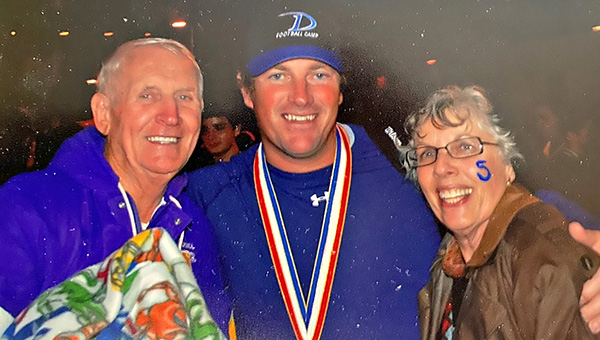 The Sizemore family — father Jim, left, son Stacy and mother Barbara — stand together after the 2009 Florida Class 3A football championship game. Jim Sizemore, who coached football at Warren Central, Vicksburg High and Porter’s Chapel Academy during a 40-year career, died at the age of 85. (Photo courtesy of Stacy Sizemore)

When he was a young man, Jim Sizemore got a scholarship offer to play football at Tyler Junior College in Texas. There was only one problem — the son of a poor Tennessee coal miner did not have a car or any way to get there.

The ever-practical Sizemore, however, came up with a solution.

“He’d tell me stories about hitchhiking from Tyler to Tennessee, and then back again. He’d hitch a ride with an 18-wheeler and go as far as he could, and then do the same thing when he came home,” his son, Stacy Sizemore said.

The first time Jim Sizemore put his thumb in the wind started a journey that covered far more than the 850 miles between Tyler and his hometown of Rogersville, Tenn. It sent him to three states and into hundreds of lives as a football coach who influenced three generations of young men.

The road trip of a lifetime has come to an end. Sizemore, who coached at seven Mississippi high schools — three of them in Warren County — during a nearly 40-year career, died Monday in Florida after a long battle with Parkinson’s Disease and dementia. He was 85.

“Fine fella. Fine coach. I learned a lot of football from Jim Sizemore,” former Warren Central head coach Robert Morgan said. Morgan was an assistant on the WC staff with Sizemore and then later became head coach from 1985-2003. “His son and his family are fine people. He’s somebody that other coaches asked about all the time that hadn’t seen him in a while. In the coaching circle, he was well thought of.”

Sizemore was the head coach at Vicksburg High from 1983-88, and spent one season and part of another at Porter’s Chapel Academy in 1999 and 2000. His coaching career in Mississippi, however, started with a long stint as an assistant at Warren Central in the 1970s.

After working in Texas for several years, he came east to Mississippi to join Warren Central’s staff when Lum Wright Sr. was hired as head coach in 1971. Sizemore helped turn the Vikings into a dynasty, as they won five Little Dixie Conference championships — the equivalent of a state title today — in seven seasons.

“He had a knowledge, and then he had a great fighting spirit. That’s to say the least,” Morgan said. “He didn’t try to teach you, but if you paid attention you learned a lot. He was somebody I loved to learn from. I always did a lot of things that he did. He helped to get the foundation started here.”

Stacy Sizemore, who is now the head football coach at St. Aloysius, said his father’s time at Warren Central provided a base not only for Jim’s coaching career, but the family as well.

“My earliest memories are of Warren Central,” Stacy said. “My mom (Barbara) taught drama and my dad coached football. I was either on the stage or the football field. I saw how he reached the kids and gave of himself.”

Jim Sizemore left Warren Central to become the head coach at Forest High School in 1980, but soon returned to the River City as an assistant at Vicksburg High. He became the Gators’ head coach in 1983 and guided them to two region championships in six seasons.

“Size was just old-fashioned. We didn’t do a lot of things, but we did them well,” said Alonzo Stevens, who was an assistant on Sizemore’s staff at Vicksburg and later had his own decade-long stint as the Gators’ head coach.

“People that he played and knew him, he was probably as hard-working a high school coach as I have met,” Stevens added. “He had principles. You did it right or you weren’t going to be there.”

He then went on to coach at Collins, Hattiesburg and Purvis before finishing his career at Porter’s Chapel during the 2000 season. His 1992 Hattiesburg team reached the MHSAA Class 5A championship game but lost to Tupelo.

Sizemore also was the head coach at Overton and Buena Vista high schools in Texas in the 1960s and had a career record of 139-88-2.

“He didn’t win a lot because he took over so many programs, would build them, and then leave,” Stacy Sizemore said. “He made his mark as the guy who turned around programs. I think he enjoyed the grind more than the winning. He enjoyed practice, and Friday night was his time for the kids to shine.”

Stacy Sizemore said his father’s job was also his hobby, which contributed to his success.

“Football was all he did. He didn’t hunt or fish, he didn’t play golf,” Stacy said.

Like most great coaches, Jim Sizemore’s influence went far beyond wins and losses. He was a mentor and influence to young men across three generations. A number of his former players — including his son, who played for Jim at Vicksburg High — have gone on to become coaches in their own right.

“That was the beginning of the work ethic they instilled in my brother and I. That’s what carried me through college and my coaching career. His mentality was, ‘You’re better than us. But you’re not going to outwork us,’” Stacy said. “Any success I had in anything else, that was the reason.”

Jim Sizemore had a well-earned reputation as a tough coach, but he was also fair, Stevens said.

“One day there was a kid who skipped practice and Size was ready to kick him off the team. Size asked him where he was, and the kid said, ‘Coach, I was laying under the house.’ Not in the house, under it. He was just tired,” Stevens said. “Size told him to go get dressed and I asked what changed his mind. Size just said, ‘He didn’t lie.’”

Stacy Sizemore said Jim’s toughness on the field also gave way to a much different demeanor off of it. He described his father as a quiet man who never raised his voice in front of students, and who sacrificed to give his family the things he did not get to enjoy while growing up poor in northeastern Tennessee. That occasionally meant having to spend time away from them.

When Jim took the job as Forest’s head coach, the rest of the family remained in Vicksburg. The River City soon became their hometown, even as they wandered to and worked in other parts of the country.

“They wanted to keep a stable environment for me and my brother (Steve),” Stacy said.

Many times, Stacy said, the stars aligned for Jim to be close to the family. After only one season at Forest, Jim was able to return to Vicksburg and coach his sons. When Stacy played college football at Southern Miss, Jim was the head coach at Hattiesburg. The two would often get together for dinner and “talk about life” more than football, Stacy said.

A couple of years after Jim retired following his stint at Porter’s Chapel Academy, and Barbara retired after a long career in the Vicksburg Warren School District, the Sizemores moved to Central Florida where their sons had settled. Steve became a pharmaceuticals salesman while Stacy began a coaching career there in 1993.

Stacy won several state championships as an assistant, and played for another as the head coach at Delray Beach American Heritage, and Jim was there to see most of them.

“He got to see at least three or four state championships that I was coaching in, and he made a point to tell me how proud he was of me,” Stacy said. “He didn’t give those out. When he gives it, he meant it, and it was good to hear.”

Stacy Sizemore said the approval from his father not only meant a lot to him, but was an example of what Jim wanted for all of his former players — to take the lessons he taught, apply them to their own lives, and use them to succeed. It was something Jim Sizemore did many times over during his life.

“He wanted his players, and his coaches, to be successful. He enjoyed that day-to-day grind that goes with it. You don’t see many coaches like that. The ones that do enjoy it are the ones that are successful,” Stacy said. “I think a lot of his players, whether they liked him or not, they respected him because he was fair.”