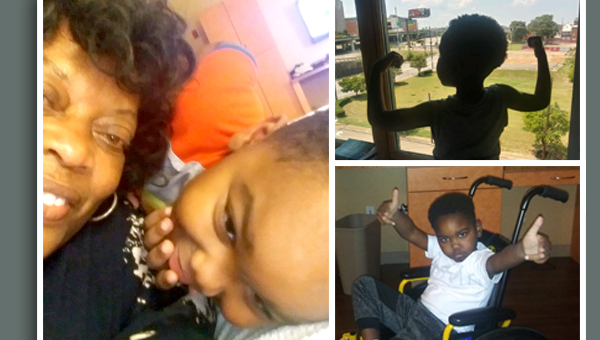 Patsy Larry, pictured with her grandson, Brody, who is at St. Jude's Children's Research Hospital in Memphis, Tenn. (Submitted Photos)

While it’s not official, the phrase, “Neither snow nor rain nor heat nor gloom of night” is a motto often used to describe the dedication of a mail carrier.

Patsy Larry, who delivers the mail in Vicksburg, has added “friendly and caring” to the creed. Word even has it Larry knows the names of all the dogs along her route.

“I try to know most of the names so if they ever want to try to act up,” Larry laughed, “I can holler at them.”

Larry began her career with the postal service in 1994 and credits the people she delivers mail to each day for making her job so enjoyable.

But for two months, Larry stepped away from her route to deliver something far more important than letters and packages. She had to deliver support to her family.

DIPG is a highly aggressive brain tumor and accounts for 10 percent of all childhood central nervous system tumors. Approximately 300 children in the U. S. are diagnosed with DIPG, most often when they are between 5 and 9 years old.

Brody, who is 6, is at St. Jude Children’s Medical and Research Center in Memphis, Tenn. In an effort to provide moral support to her daughter and Brody’s mother, Bridgett, Larry went to be with them.

“(Bridgett) had been told something devastating and the hospital staff knew we needed each other,” Larry said. St. Jude made an exception for her to be with her daughter and grandson even with the current COVID-19 restrictions. “The doctor worked it out and they let me stay.”

For more than two months, Larry was in Memphis with her daughter and grandson. While there, she spent her nights at the Ronald McDonald House, where she said she was treated well.

“Just like they say on all the commercials,” she said.

In addition to the support from the Ronald McDonald House Charities, Larry said she has had a lot of support from her family.

“And I have a lot of co-workers who have all rallied behind me,” Larry said. “They took up money. My daughter is not working and I had to do a lot for her, but we made it, though.”

As for Brody, “Ooh! He has the biggest personality and he is not afraid of anyone,” she said. “He can hold a conversation with adults. He is just that type of guy, an all-around great kid and smart kid and anybody that knows him likes him.”

Larry said her grandson has had a “great” attitude while at St. Jude.

“He is taking it like a champ,” she said.

Brody is a student at Dana Road Elementary School and would have been in first grade this year if not for his diagnosis.  Larry, whose routes include portions of downtown Vicksburg, has since returned to delivering the mail each day.

For anyone who would like to help out with expenses the family has incurred, a GOFUNDme has been set up under Bridgett H. Larry at www.gofundme.com/f/fz4amt-brody-strong.