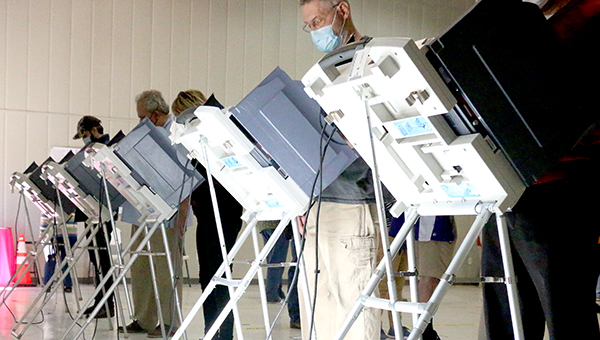 Every voting machine at the polling place at Calvary Baptist Church was busy for most of the day Tuesday as a record number of voters turned out for the general election. (Terri Cowart Frazier/The Vicksburg Post)

Voters dealt with parking problems and waited in long lines Tuesday, but it did not dissuade them from casting their ballots in what county election officials say was a record turnout for the 2020 presidential elections.

According to incomplete and unofficial returns from the Warren County Circuit Clerk’s office, 16,381 — about 60 percent of the county’s 27,486 active voters — cast ballots in Tuesday’s election.

Circuit Clerk Jan Daigre said the total number of voters is expected to increase once officials finish counting all of the 4,100 absentee ballots cast in the election. She said some of the ballots were counted Tuesday, with the remainder to be counted Wednesday.

“It’s been a very busy day,” Daigre said. “No problems to speak of; none that were significant with the amount of voters that we had. I think there were a few little glitches and they were worked out without any problems at all.”

Daigre said the final results of the election will not be certified until Nov. 13 because of changes in the law affecting affidavit ballots. Those are cast if a person does not have their voter ID; or because they are not listed on the poll book at the precinct; or requested an absentee ballot, claimed they did not receive it and voted at the precinct.

Under state law, if a person who does not have an ID and votes by affidavit, they have five days to bring their ID to the clerk’s office. The five-day extension, Daigre said, is not given to all people who cast an affidavit ballot.

Daigre and Warren County Election Commission Chairman Sara Dionne said this year’s turnout was much larger than for the 2016 election, when 50 percent of the county’s voters went to the polls.

Besides the presidential election, voters were asked to vote on whether to allow the use of medical marijuana and to vote on a new Mississippi State Flag.

There were also Senate and Congressional races contested.

“We had a phenomenal turnout,” Warren County Election Commission Chairwoman Sara Dionne said. “The precincts were busy all day long. The only problem was managing the traffic. The people were very cooperative.”

Daigre said there were no major issues at any of the precincts.

“I’m very pleased,” Daigre said. “It was a great voter turnout and I think the precincts did a really good job sanitizing (the equipment at the polls) and making people feel safe when they went to the polls. Some of the voters congratulated them for doing a good job in Warren County.”

When all the votes have been counted, Mississippi will have a new state flag. With more than 65 percent of... read more