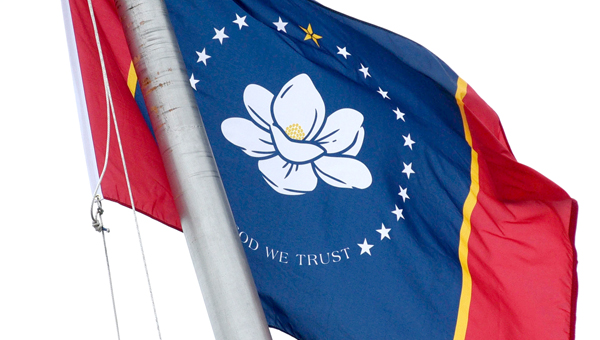 The "In God We Trust" flag. (Photo by Courtland Wells/The Vicksburg Post)

There is just one formality left before Mississippi’s new state flag — the “In God We Trust” flag — becomes official.

Even though nearly 72 percent of Mississippi voters cast their votes in favor of the new flag, the Legislature must ratify that vote when they reconvene in January.

On Wednesday, Lt. Gov. Delbert Hosemann said ratifying the vote would be among the first actions taken by the Legislature when they organize on Jan. 5, 2021.

When done, the new flag will begin flying high over state-controlled buildings throughout the state.

Locally, Vicksburg Mayor George Flaggs Jr. said Wednesday, he would recommend a resolution at Monday’s meeting of the Board of Mayor and Aldermen that would allow for the purchase of the new flag and authorize it to fly over city buildings once the Nov. 3 General Election results are certified by the Mississippi Secretary of State’s office. The certification will happen later this month.

Some other cities in Mississippi decided not to wait. On Wednesday, officials hoisted the flag outside Hattiesburg City Hall and on the campus of the University of Mississippi in Oxford.

When the flags are placed on poles near Vicksburg’s city buildings, it would end a more than the three-decade absence of a state flag from city-controlled buildings.

In 1987, then-Mayor Robert Walker and city leaders moved to remove the former state flag — which contained the Confederate Battle Flag in the upper right corner — from city buildings.

Since the former state flag was officially retired by the Legislature and Gov. Tate Reeves, it has not flown at any of the schools within the Vicksburg Warren School District. Superintendent Chad Shealy said Wednesday that the district will move ahead with purchasing the new flags, but will not fly them until the Legislature ratifies the decision in January.

As for the Warren County Board of Supervisors, Board President Dr. Jeff Holland said supervisors will discuss when to begin flying and displaying the state flag at county-managed buildings.

Bubba Bolm, curator of the Old Court House Museum, a building owned by the county, said Tuesday’s decision was bittersweet, but a needed change for Mississippi to move forward.

“The symbol in the Mississippi Flag (the Confederate Battle flag in the former state flag) has just been a problem for years now and I don’t think it was ever going to end,” Bolm said. “Certainly Mississippi doesn’t want to be known for a flag used by racists to cause problems. So it is good we have a new flag coming in and if we have to change, let’s go ahead and get it done and over with. I can’t wait to fly one (the new state flag).”

As soon as Reeves signed the legislation over the summer that retired the former flag and established the commission that ultimately selected the new design and recommended it to state voters, the Old Court House Museum replaced the former flag with a flag known as the “Old Territory Flag.”

Bolm said the new flag has already drawn plenty of interest and will fly at the museum once available.

“I like the new choice and the more I see it the more I like it,” Bolm said. “It is an interesting flag, but it is time for a change and we will start selling them in the bookstore as soon as they are available.”

Tim Reeves, editor of The Vicksburg Post, contributed to this report.