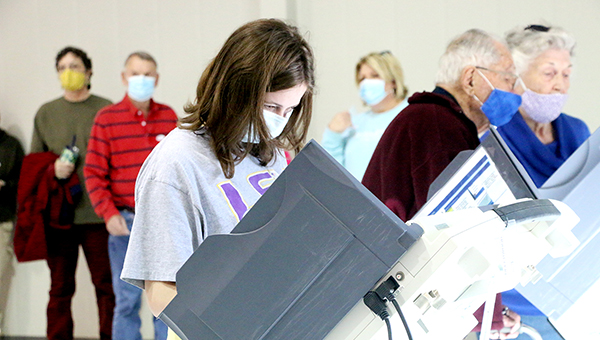 JACKSON (AP) — Mississippi is sending all four of its U.S. House members back to Washington.

Voters also approved the legalization of medical marijuana in Mississippi, choosing to adopt the less restrictive of two medical marijuana ballot measures. They voted to eliminate a Reconstruction-era electoral college provision in races for governor and other statewide offices.

Justices Josiah Dennis Coleman, Mike Randolph and Leslie King were reelected to the state Supreme Court. Yet to be decided is one Supreme Court race between Justice Kenny Griffis and Court of Appeals Judge Latrice Westbrooks, who would be the first Black woman on the Mississippi Supreme Court.

Mississippians have voted in favor of legalizing medical marijuana, opting for the less restrictive of two proposals on this year’s ballot.

Initiative 65 amends the Mississippi Constitution to allow the prescription by a doctor of up to 5 ounces of marijuana per month for people who suffer from more than 20 medical conditions.

The Mississippi Department of Health will issue a medical marijuana identification card that would allow patients to obtain medical marijuana from a licensed treatment center. Marijuana sales can be taxed at the current state sales tax rate of 7 percent.

More than 100,000 people signed petitions to put Initiative 65 on the ballot. Voters had to choose between Initiative 65 and another medical marijuana measure, Alternative 65A, which was a more restrictive policy.

Alternative 65A, authored by members of the Mississippi Legislature, would have restricted smoking marijuana to people with terminal illnesses, although people who are ill but not dying could use oils or other forms of the drug. Alternative 65A left tax rates, possession limits and certain other details to the Legislature, instead of putting those details in the constitution.

Mississippi voters have voted in favor of eliminating a Reconstruction-era electoral college provision in races for governor and other statewide offices.

Mississippi is the only state with the multistep process for electing a governor. The process was written when white politicians across the South were enacting laws to erase Black political power gained during Reconstruction. The separate House vote was promoted as a way for the white ruling class have the final say in who holds office.

Black plaintiffs sued the state over its electoral process last year. Days before the 2019 governor’s race, U.S. District Judge Daniel P. Jordan III wrote that he has “grave concern” about the constitutionality of the electoral vote provision. Jordan wrote that the plaintiffs’ argument about violation of one person, one vote is “arguably … their strongest claim.”

In September, Gov. Tate Reeves described the lawsuit as a ploy by state Democrats to get a Democrat elected governor.

Now that the measure has passed, candidates for governor or any other statewide office in Mississippi must receive a majority of the votes in the general election to win. If no candidate receives a majority, a runoff election will be held to determine the winner.

Kelly, 54, a former district attorney and Tupelo city prosecutor, has been in the House for the state’s 1st District since winning a 2015 special election. A brigadier general in Mississippi’s National Guard, Kelly serves on the House Armed Services Committee, the House Agriculture Committee and Military Personnel subcommittee.

Throughout his congressional career, he has advocated for higher military spending and better healthcare for veterans. He opposes abortion and has voted to repeal the Affordable Care Act.

Kelly defeated self-described democratic socialist and first-time candidate Antonia Eliason, a law professor at the University of Mississippi. Eliason ran in support of “Medicare for All,” increasing minimum wage, marijuana legalization and the Green New Deal.

Rep. Bennie Thompson has won reelection to his U.S. House seat in Mississippi.

The 72-year-old has been in Washington since winning a special election in 1993. He is chairman of the House Homeland Security Committee.

He is the longest-serving member of Mississippi’s current congressional delegation. He is also the only Democrat and the only African American representing the state on Capitol Hill.

The congressional district includes most of Jackson and stretches along the Mississippi through the Delta. It is the only majority-Black district in the state.

Throughout his congressional career, Thompson has supported relief efforts for parts of the state affected by hurricanes and other weather issues and has worked to pass legislation aimed to lessen racial disparities in the education and healthcare systems.

He served as the chairman of the Democratic National Convention and endorsed former Vice President Joe Biden ahead of Mississippi’s primary in March.

“Our country is in dire need of moral leadership that can end today’s division and hate and bring our country together,” Thompson said then. “Joe has shown that he has character and unmatched skills to lead us and get things done.”

The former district attorney for Madison and Rankin Counties was elected to Congress in 2018. He campaigned as a supporter of law enforcement and has pushed himself as someone who would seek stronger immigration enforcement, saying it would help decrease illegal drugs. Guest serves on the Homeland Security Committee and the subcommittee on Border Security, Facilitation and Operations.

Republican U.S. Rep. Steven Palazzo is keeping his seat in Congress after running unopposed in his south Mississippi congressional district.

Palazzo was a state House member when he unseated Democratic U.S. Rep. Gene Taylor in 2010. Palazzo, 49, is a military veteran and often praises President Donald Trump.

He defeated three Republican challengers for the nomination in March.

Justice Kenny Griffis is running to keep his seat on the Mississippi Supreme Court representing the central part of the state.

Griffis was appointed by former Gov. Phil Bryant in 2019 to fill a vacancy on the nine-member court. He won an eight-year term. Griffis had served 16 years on the Mississippi Court of Appeals.

He is being challenged by Latrice Westbrooks, who’s currently on the Court of Appeals. If she wins, Westbrooks would be the first Black woman and the fifth woman ever to serve on Mississippi’s Supreme Court.

Supreme Court Justice Leslie King has been reelected to the Mississippi high court representing the central part of the state. He ran unopposed.

King has served on the nine-member high court since being appointed by then-Gov. Haley Barbour in 2011.

A native of Greenville, King began practicing law in 1973. He first served in the Mississippi House of Representatives from 1980 through 1994, until being elected to the Court of Appeals in 1994. He served as Chief Judge from 2004 to 2011, when he joined the Supreme Court. He became a Presiding Justice of the Supreme Court in Feb. 2019.

Chief Justice Mike Randolph has been reelected to the Mississippi Supreme Court for a third eight-year term after running unopposed.

Randolph represents the southern part of the state. He was appointed to the Mississippi Supreme Court by Gov. Haley Barbour in 2004. He was then elected in November 2004 and reelected in 2012. He became a presiding justice of the Supreme Court in 2013, and chief justice in February 2019.

Randolph served in Vietnam before he began practicing law in 1975. He formed his own firm, Bryan Nelson Randolph, PA., serving as president and CEO.

Coleman was first elected in 2012 and is the second member of his family to serve on the state’s nine-member high court. He was elected in the northern part of the state.

Coleman is the grandson of former Gov. J.P. Coleman, who served briefly on the Mississippi Supreme Court. The former governor also was on the 5th U.S. Circuit Court of Appeals and at one point held the role of state attorney general. Coleman’s father was also an appellate court judge.

Before becoming a judge, Josiah Coleman practiced law for 12 years in Tupelo and Oxford.

Coleman was running against Judge Percy L. Lynchard Jr., who has served in Mississippi’s 3rd Chancery District Court since 1995. Lynchard served as the DeSoto County prosecuting attorney from 1992 to 1995.