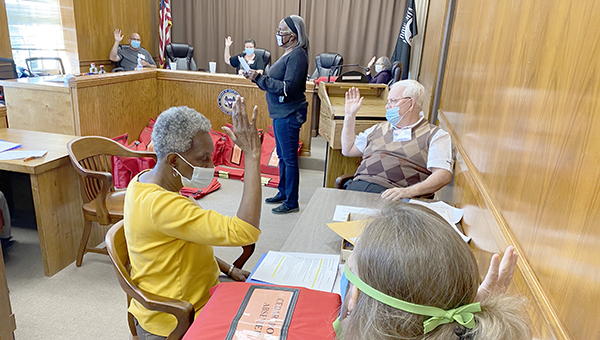 Members of the Warren County Resolutions Board take their oath Tuesday before working on the thousands of absentee ballots. After two days of organizing the ballots, election officials hope to begin counting the ballots Thursday. (Tim Reeves/The Vicksburg Post)

Under state law, ballots received five working days after the election and postmarked by Nov. 3 will be counted. Also, people who did not have their photo ID and voted by affidavit ballot have five days to bring their ID to the clerk’s office to have their ballot counted.

The five-day period ends Nov. 10. As of Friday, Dionne said, 23 absentee ballots have been received by the clerk’s office since Election Day.

“I do not have a count on affidavits (ballots),” she said. “We’ve just been taking one bag at a time, opening it and processing it,” she said, adding the affidavit count will also resume Monday when the election commissioners return to the courthouse.

There is just one formality left before Mississippi’s new state flag — the “In God We Trust” flag — becomes... read more