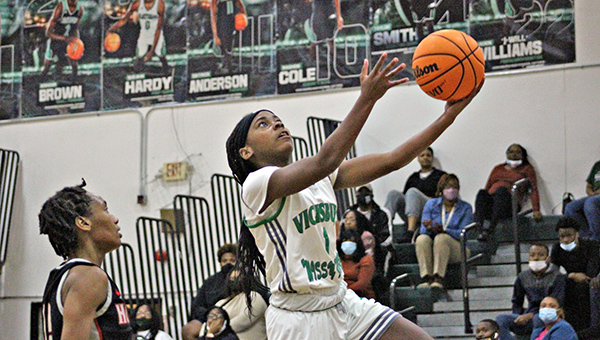 A fast start by the Vicksburg Missy Gators quickly gave way to a cold spell, the cold spell turned into a deficit, and eventually the deficit into a loss.

Vicksburg scored the first nine points of the game, and 18 in the first quarter, but only managed 25 the rest of the game. It scored two points in a 10-minute span of the second and third quarters. They went 15-for-30 at the free throw line in the game.

“Holmes Central is a good team. But the problem we had was, we got in our own way,” Vicksburg coach Troy Stewart said. “I think missing all the free throws we missed took momentum from us and gave it to them. We blew too many layups, had a few turnovers, and foul trouble hurt us. All of the things that could go wrong tonight, went wrong.”

Jana Colenburg led Vicksburg (1-1) with 11 points, while Sha’kora Knight and Layla Carter scored 10 each. Destini Sims added eight. The Missy Gators, though, were plagued by foul trouble all night long. Sims fouled out in the fourth quarter, while Carter and Knight finished the game with four fouls each. Colenburg had three.

Stewart said the foul trouble forced him to substitute earlier than he wanted to in the second quarter, which led to Holmes County Central taking control of the game.

The Lady Jaguars trailed by nine late in the first quarter, but outscored Vicksburg 18-2 in the second period. They took their first lead with four minutes left in the first half, at 19-18, briefly gave it back, and then scored the last five points of the half and never trailed again.

Vicksburg was able to keep the margin around 10 points for most of the second half, until Holmes finished the game on an 11-0 run over the last 3 ½ minutes.

“I had to sit three people down for two fouls early, and they got momentum because they pressed us. I had ball-handlers in, but the problem was they attacked the people who were weak ball-handlers,” Stewart said.

Although it was a frustrating loss, Stewart said he was not overly concerned about its deeper meaning for the rest of the season. It was only the second of more than 20 regular-season games, after all, and the expectations have not lessened for a team that reached the MHSAA Class 5A semifinals last season.

“I’m not going to worry, because if we play well enough the rest of the season we’ll see them again. And second, this type of loss will let the girls know how hard we have to work in the future to get better,” Stewart said. “I’m not stressing nor am I worried right now. We’ve just got to go back to the drawing board and get a little better.”

Led by Miller, Crystal Springs got out to a 27-16 lead at halftime. Warren Central (0-1) played the Lady Tigers to a standstill in the second half, but could not close the gap.

Warren Central will next play Tuesday at 6 p.m. against Ridgeland, in its home opener. All of Warren Central’s games this season will be played at Warren Central Junior High because of ongoing construction work at the high school.

(G) PCA 51, Franklin Academy 30
Yakia Burns had her third 30-point game in as many outings for Porter’s Chapel Academy, dropping 33 on Franklin Academy as the Lady Eagles earned their second win in a row.

Zyer Smith added 14 points for PCA, with 12 of those coming in the first half, and Macey Bufkin scored three. Burns scored 19 of the team’s 21 points in the second half.

PCA and Franklin will play again on Tuesday, in Franklin’s gym in Winnsboro, La.

Vicksburg went 7-for-12 from the free throw line in the fourth quarter.

“The free throws that we made were the difference, and the 2-2-1 full court pressure applied to them down the stretch was a major factor,” Vicksburg coach Kelvin Carter said. “They had three key turnovers late in the fourth quarter that we capitalized on. All three put us in position to finish the game.”

(B) Franklin Academy 51, PCA 45
Chris Taylor finished with 24 points and four steals, but Porter’s Chapel Academy (0-1) wasn’t able to get past Franklin Academy in a boys’ basketball game on Thursday.