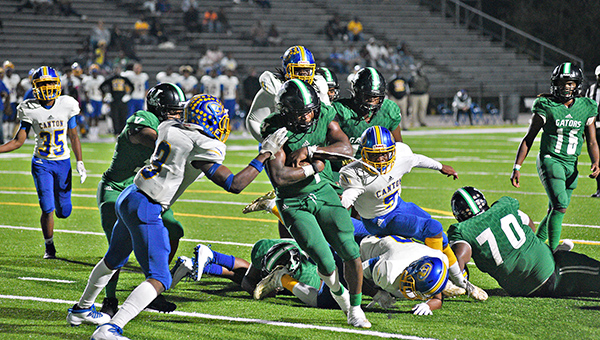 During the 2020 season, the Vicksburg Gators have had a pair of three-game losing streaks, been shut out twice, lost a game on the final play and another in the last two minutes. More than likely, they will finish with a losing record for the fourth season in a row.

Despite all of that adversity, however, the Gators are heading into the final game with something to play for — not only this week, but beyond.

Vicksburg (3-6, 3-3 Region 2-5A) has clinched a playoff berth, and can even climb up to the No. 3 seed from Region 2-5A by beating Holmes County Central (6-2, 5-1) on Friday night. It’s the Gators’ first playoff berth since 2017, and first-year head coach Todd McDaniel called it a big step forward for a rebuilding program.

“It means a lot. The kids have been knocking on the door all year long. We’ve played against really, really good football teams. A lot of the teams we played either won their district or came in No. 2. We haven’t lost to any slouches,” McDaniel said. “It’s a testament to the kids’ resolve to go out there and play their hardest every Friday night. As you can see over the course of the past five weeks, we have drastically improved.”

Indeed they have, which is why McDaniel is viewing Friday’s game not just as a chance to improve the Gators’ seeding, but launch them into what he hopes is a deep postseason run.

After being shut out in back-to-back games to start the season, Vicksburg has averaged 25 points per game in its last seven and scored more than 30 in each of its last two outings. Two of its six losses, to Natchez and Cleveland Central, were decided in the last two minutes and could have flipped a losing record to a winning one had a play or two gone the other way.

McDaniel attributed the Gators’ slow start to not having a full offseason program to help a new coaching staff implement its system. After nearly five months of practice and nine weeks of games, however, he feels they’re hitting their stride and can be a sleeper in November.

“Everything takes time. Everybody wants instant grits. In football, it doesn’t work that way,” McDaniel said. “But if you keep chopping wood, put on your shades, put in your ear plugs and not listen to what the outside folks have to say and keep coaching and playing, eventually you’ll get to where we want to go.”

Friday’s game at Holmes County Central will have a huge bearing not only on the Gators’ playoff situation, but the entire Region 2-5A race.

If Holmes County Central wins, it will earn the No. 2 seed, Neshoba Central would be the region champion, Ridgeland is third and Vicksburg fourth.

If Vicksburg wins, it claims the No. 3 seed and Ridgeland becomes the region champion. Neshoba Central would be the No. 2 seed and Holmes County Central drops all the way to fourth.

“The coach from Ridgeland told me he’s the biggest Gator fan ever right now,” McDaniel said with a laugh.

Vicksburg’s first-round playoff opponent is uncertain. The Region 1-5A playoff picture is just as muddy as it is in Region 2-5A, with four teams jockeying for position. It didn’t really matter to McDaniel, though. With a playoff berth secure, he’s looking to build momentum for next week as much as he wants a win this week.

Similarly, McDaniel downplayed the rivalry and abundance of common ties between Holmes County Central and Vicksburg.

Holmes County Central’s head coach Marcus Rogers was Vicksburg’s coach from 2014-17, and quarterback Levi Wyatt played at Vicksburg as a freshman in 2018. Wyatt threw for 2,249 yards and 19 touchdowns in his only season with the Gators, and has 668 yards and nine touchdowns in six games with Holme County Central this year.

McDaniel, who is three coaches removed from Rogers in Vicksburg’s coaching lineage, said getting another win before the playoffs trumped any thoughts of a rivalry between the teams.

“I understand some of the things with the quarterback and defensive back played here, and the coach was here, but my whole thing is we just need to go out and play football and be a well-oiled machine. I think we might be at that point, but we’ll see Friday,” McDaniel said. “Every game is a rivalry game for me. I want to beat every opposing coach and every opposing team.”

Just two days after he had to be airlifted to a Memphis hospital, Ole Miss freshman tight end DaMarcus Thomas... read more