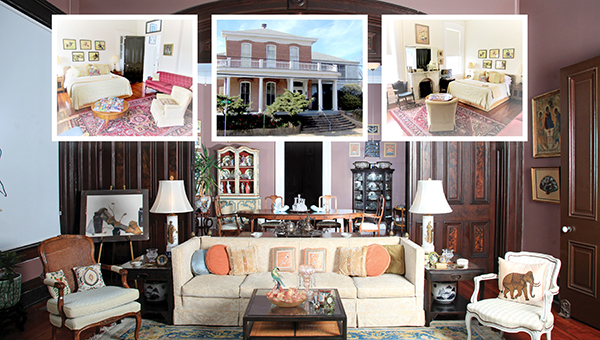 A local bed and breakfast has been recognized by Tripadvisor, the world’s largest travel platform.

The award is presented to hotels — or in this case, a B&B — that rate in the top 10 percent worldwide.

“It was a shock,” Dawson said of receiving the news. “We really just didn’t know how to handle it. There are just so many wonderful places in Vicksburg and the world, and we don’t believe in competition, so we were in shock and humbled.”

Located at 1022 Monroe St., the Bazsinsky House was built by Joseph Bazsinsky. While the specifics of the home’s history vary from two separate accounts, one from a written family history and the other from researched accounts, both conclude Bazsinsky built the home as a townhouse for his large Jewish family, which was originally from Prussia. The family remained in the home for four generations until the early part of the 21st century.

Dawson and Mitchell bought the home in 2006 to ensure it would remain part of Vicksburg’s history.

And, in 2009 after the home was restored, Dawson and Mitchell opened it up to the public.

While Dawson could not calculate the number of guests who have stayed at Bazsinsky House over the course of its more than 10 years of operation, he did say last year he had guests representing 23 different countries.

“The bulk of our guests in the past have been international visitors,” Dawson said.

After the COVID-19 pandemic hit, he said, there were cancellations from the foreign visitors, who tend to book early.

However, the men have managed to continue their business with “American” guests.

The Bazsinsky House offers two guest bedrooms and all visitors are treated to a full-scale Southern breakfast.

In addition to the Tripadvisor Traveler’s Choice 2020, for the past seven consecutive years, Bazsinsky House was also a Certificate of Excellence winner.