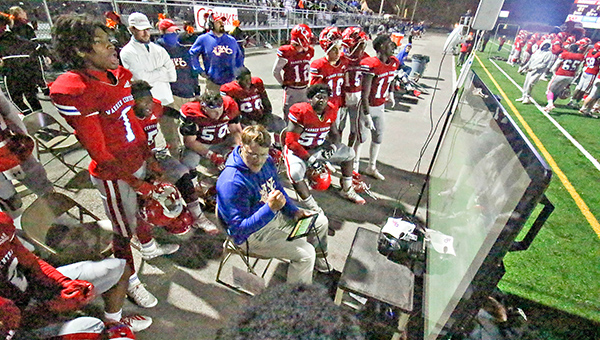 Vikings getting rest, ready for postseason

Everyone in Region 2-6A will have their eyes on Clinton on Friday night.

That is where homestanding Clinton will face Starkville in a game that will sort out the region’s convoluted playoff race once and for all. It’s the only game on the league schedule, giving it a marquee appeal.

About 35 miles to the west, however, Warren Central head coach Josh Morgan said his attention is elsewhere. The Vikings have locked up a playoff berth, and after back-to-back losses to finish the regular season Morgan is more interested in getting his team ready for next week’s first-round game.

“We’re going to try to get our work done, and try to do everything we can to make us a better team. Fine tune some things and get ready for the final push,” Morgan said. “When we know our opponent we’ll be able to zone in and we’ll be ready to go. We’re trying to get our ducks in a row at this point in time, and make sure we’re using this week to the best of our ability to make us better so we’ll be ready to go.”

The Starkville-Clinton game will determine not only the region title, but the playoff seeding and destinations for the rest of the league.

If Clinton (6-2, 5-1 Region 2-6A) wins, it is the region champion as its only one-loss team and Starkville is eliminated from playoff contention with its third loss in region play. A three-way tiebreaker behind Clinton would leave South Panola in second place, Warren Central in third and Madison Central in fourth.

If Starkville (7-2, 3-2) wins, it creates a five-way tie for first place that would be broken by a point differential tiebreaker. Madison Central would wind up as the region champion, Warren Central finishes second, and South Panola is eliminated. Starkville would be third if it beats Clinton by five points or more, and fourth if it wins by four or less.

With so many moving parts in the playoff race, Morgan said it was a relief knowing Warren Central’s spot is secure regardless of what happens.

“Solidifying that, it’s good to know that we’re in. We don’t know who or where, but the fact of knowing that we’re in sure does make this week a lot easier on us all,” Morgan said.

The open date this Friday gives Warren Central (7-2, 5-2) a welcome break to regroup from back-to-back losses after it had started the season 7-0. Its record includes two forfeit wins for COVID-19-related reasons.

The Vikings’ defense allowed three touchdowns in the first 5 ½ games, but was torched for seven touchdowns and 49 points in a span of four quarters against Clinton and South Panola. The Vikings did shut out South Panola in the second half last week, but gave up two more touchdowns in overtime and lost 36-35.

Morgan noted there were some specific reasons for the sudden defensive meltdown. A sluggish offense allowed Clinton to run nearly every play on Warren Central’s side of the field in the second half of a 31-16 loss. South Panola scored on two long passes.

Morgan described it as a case of two quality opponents taking advantage of the opportunities they were given.

“The Clinton game, field position had a lot to do with it. It was also the way we responded to adversity. The Panola game, you take away those first two series and I feel like we played a very competitive, complete game,” Morgan said. “You’ve got to put it all together this time of year. It’s just that everybody is good that you’re playing. We’re looking forward to putting it all together and making a good push.”

Handling the adversity and mastering the mental aspect of the game, Morgan added, will be the key to success as the stakes get higher in the postseason. After letting a 10-0 lead slip away against Clinton, he was happy to see the Vikings rally from a 14-point deficit against South Panola.

“This game is a lot more mental than people think. It’s a really big aspect of the game, from how you prepare to mental toughness and how you handle adversity, and your fight and desire and spirit of individuals and your team as a whole,” Morgan said. “I saw a determined team Friday, and a very mentally tough team that hung together. That alone is encouraging. We just have to bring everything up to that level. We’re learning a lot, but the past two weeks we have really grown.”