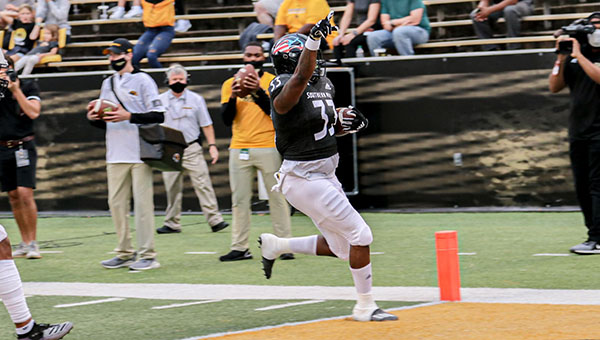 Southern Miss running back Kevin Perkins scores one of his three touchdowns in a 24-13 win over North Alabama on Saturday. (Southern Miss Athletics)

HATTIESBURG (AP) — Nothing, even victory, seems to come easy these days for Southern Miss.
Kevin Perkins scored a career-high three touchdowns, including two in the fourth quarter, as Southern Miss rallied to beat North Alabama 24-13 Saturday at M.M. Roberts Stadium.

“It’s great to win,” Billings said. “Our kids handled adversity very well today and could’ve given up. They played well, and I was excited about our offense in the fourth quarter. I told the defense it’s nice to see the Nasty Bunch back. It’s the best they’ve played all year, and they played with enthusiasm and excitement. They kept us in the game until offensively we got rolling in the fourth quarter.”

Southern Miss, which played with third-string quarterback Trey Lowe behind center, rushed for 245 yards as a team. Frank Gore Jr. had a team-high 103 yards.

North Alabama (0-3), which was playing its first game since Oct. 17, was held to 23 yards rushing. Still, it jumped out to a 10-0 lead in the first half on a 12-yard TD pass from Blake Dever to Andre Little, and a 29-yard field goal by Sam Contorno.

Dever completed 21 of 28 passes for 153 yards and a touchdown.
Lowe, the USM quarterback, as 12-of-20 for 100 yards, with no touchdowns and two interceptions.

“It was just a good, positive vibe on the field. I really think the defense was playing so well that they kept giving us energy,” Billings said. “The defense did a great job of eliminating the explosive plays and keeping everybody involved really made the difference.”

Southern Miss will go on the road next week to play Western Kentucky. Billings hoped the momentum from Saturday’s win will carry over.

“You hope you will. You play for the love of the game, but there’s no love for the game when you don’t win. Nobody plays this game every week to go get beat. You have goals and things you want to accomplish and those things have to do with wins,” Billings said. “There’s nothing like a win. It makes life good again. My wife will let me back in the house this week and it’ll be great. She may even cook a meal for me. It’s been tough living in the garage with only water and cold snacks. It’ll be a great week I know for Coach Billings.”