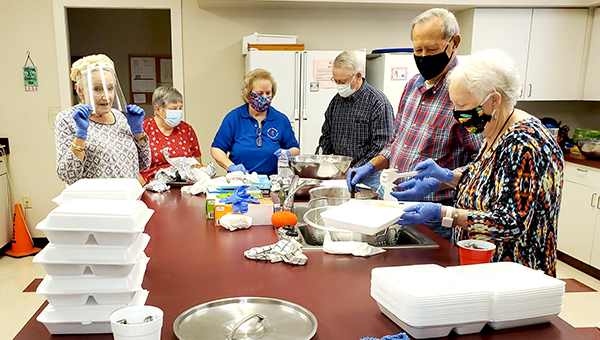 While many local churches and organizations have been forced to cancel or postpone events because of the coronavirus, two churches decided to modify their programs and continue their traditions.

German music filled the fellowship hall of Redeemer Lutheran Church on Cain Ridge Road as customers made their way to pick up their dinners of bratwurst, German potato salad and beans.

Despite concerns for COVID-19, the church’s 33rd annual German Fest was going ahead, serving meals to those who wanted a taste of German cuisine.

“It’s going OK,” said Ruth Osburn, the program’s chairman. “It’s going good; a lot of people are coming in. We decided to do it; we made it happen.” Usually, Osburn said, the hall is decorated for the event and there are tables for people to enjoy their meal in the hall.

“But we changed that this year because of COVID,” she said. “Besides, one thing we’ve found out is that most of our customers do carry-out, so it wasn’t a problem.

At Gibson Memorial, church members and other visitors at one point filled the parking lot to buy to-go orders of spaghetti, bread and salad and to look over tables of cakes, pies and jellies.

“We’ve had a pretty good crowd,” said church member Mary Westbrook. “The car dealerships usually order in advance for their employees and we’ve delivered those.

“Usually we have a bazaar, but we decided not to do it this year because of the COVID,” she said. “We didn’t know if we could handle that safely.”

Because their fundraiser is not as large as Crawford Street United Methodist’s annual turkey dinner, Westbrook said, “We felt that we could do our dinner safely. So far, everything has gone well.