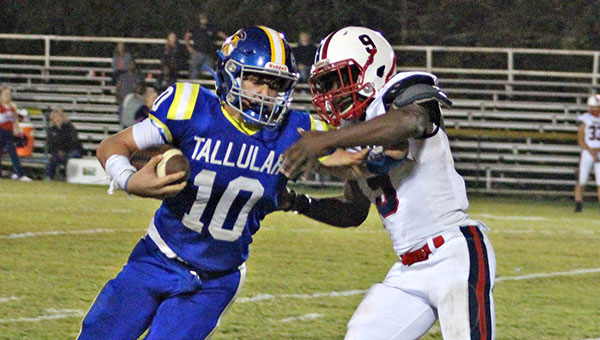 TALLULAH — On its first play from scrimmage Friday night, Tallulah Academy missed a block and running back Walker Sullivan was tackled in the end zone for a safety.

After that, nearly every other possession wound up in the other team’s end zone.

Carter Sullivan rushed for 203 yards and two touchdowns on only seven carries, and Tallulah rolled up 334 rushing yards as a team as it crushed North Sunflower Academy 50-30 in the first round of the MAIS Class 1A 8-man football playoffs.

Tallulah (7-3) won its fourth game in a row and advanced to the Class 1A semifinals for the fifth time in seven seasons. It will go on the road to play top-seeded DeSoto School next Friday.

“The boys played great football. I’ve been waiting for this. I’ve been hoping this was when it would happen. I don’t think we could play much better,” Tallulah coach Bart Wood said. “I don’t know who all scored, but I think it was everybody. They just played a great, great ballgame. I was very proud of them.”

Tallulah has scored at least 42 points in every game during its winning streak. It reached that total by halftime against North Sunflower (5-6), although it did have to weather a rough start.

North Sunflower’s Jacob Henley threw a 40-yard pass to Corey Coleman down to the Tallulah 1-yard line on the first series of the game. The Trojans kept North Sunflower out of the end zone with a goal line stand, but then Walker Sullivan was swarmed in the end zone for a safety.

North Sunflower went three-and-out on its next possession, and then Tallulah’s offense really went to work.

Paul Michael Machen scored on a 16-yard run and Carter Sullivan a 2-yard run — after he was tackled from behind at the end of a 78-yard breakaway — to put Tallulah ahead 14-2 after one quarter.

Tallulah then scored touchdowns on four straight second quarter possessions to take a 44-10 lead into halftime. It tacked on one more TD two plays into the third quarter, on a 3-yard run by Walker Sullivan, before the starters were pulled and a running clock was started in accordance with the MAIS mercy rule.

In all, Tallulah scored on seven of eight possessions after the safety. Its only empty trip was a kneeldown with one second left in the first half.

“We were so pumped up after that (the goal line stand) that it turned us up,” Morgan said.

Carter Sullivan was the only Tallulah player with more than 31 rushing yards, but four others scored touchdowns. Walker Sullivan, Machen and Morgan each ran for scores. Morgan also threw two touchdown passes, a 17-yarder to Marsh Wood and a 59-yard strike to Machen.

North Sunflower scored three second-half touchdowns, on a 49-yard run by Brian Coleman, a 16-yard run by D.D. Williams, and a 58-yard run by Corey Coleman after the game was already out of hand.

Holmes pulls away to beat Vicksburg

Vicksburg High was looking for an upset victory, a bit of positive momentum, and perhaps a more favorable matchup in... read more