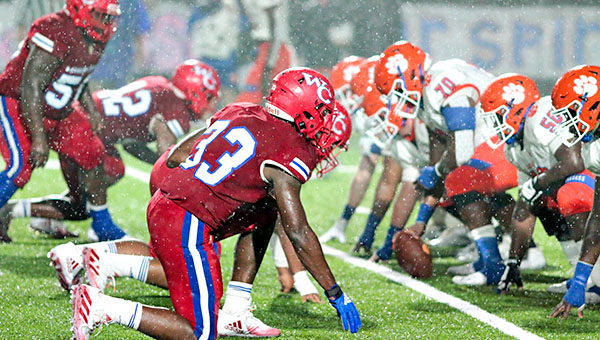 Warren Central and Madison Central football players line up across from each other earlier this season. The teams have played each other every year since 1995, but the series could go on hiatus next season because of the MHSAA’s recent realignment. (Walter Frazier/For The Vicksburg Post)

Sports column: Realignment will change some rivalries, start new ones

For years, decades even, you could set your watch by the high school football schedule. The exact dates floated a bit, but the same games were played in the same order, year after year after year.

The Red Carpet Bowl kicked things off around Aug. 20. St. Aloysius and Madison-St. Joseph would play each other in late September or early October, and in more recent years at the beginning of the season. Warren Central plays Madison Central in the second week of October and Clinton in the fourth.

That orderly tradition started to unravel a few years ago. St. Aloysius joined the MAIS and had to replace most of its old opponents with brand new ones. Vicksburg High dropped from Class 6A to 5A and got a whole new set of region opponents.

Now, with the latest MHSAA and MAIS realignments, the transformation of Warren County’s traditional football schedule will be complete. The 2021 schedules will look vastly different from what we’ve come to know.

Warren Central’s move from its longtime home of Region 2-6A to 3-6A might not end its longstanding rivalries with Clinton and Madison Central, but it will alter them. If they’re able to schedule each other, those will now be non-region games in the heat of September rather than games with huge playoff implications in the chill of October.

Porter’s Chapel Academy is switching to 8-man football, which will bring with it a brand new set of opponents. Some of them are also converts to 8-man, which might mean some familiar teams, but not many the Eagles have seen recently.

Vicksburg’s Region 2-5A schedule will have a couple of new teams and might be reconfigured. St. Aloysius seems to have a new schedule every two years.

The loss of tradition is always sad. The Vicksburg-Warren Central game, for example, has lost a few mph off its fastball since it became an early-season tune-up game rather than a league contest late in the season.

Like the old saying about one door closing and another opening, however, there will be new rivalries to rush in and take their place.

Porter’s Chapel should finally be able to create a proper rivalry series with Tallulah Academy. The schools are 20 miles apart and have only played each other eight times in nearly 50 years.

Warren Central will lose Clinton and Madison Central, but gain Northwest Rankin, Pearl and Brandon. They have histories with all three that will have more chapters written in the years to come.

Vicksburg High has had a hard time finding a blood rival in Region 2-5A, but will continue to build its history with some foes.

This 2020 season has been an oddball on many fronts. From COVID-19 to shortened schedules, it’s thrown us a lot of curveballs and change. Its last trick might be that we’ll soon look back on it as the end of one era and the beginning of another, as the football calendar takes on a new look for the foreseeable future.

Vicksburg High basketball player Keshawn Brown scored 11 of his 18 points in the fourth quarter of a 68-58 win... read more