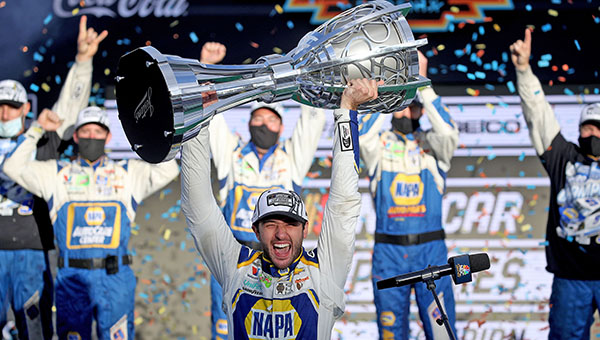 AVONDALE, Ariz. (AP) — The new face of NASCAR circled Phoenix Raceway for a celebratory lap of his finest achievement. Chase Elliott, NASCAR’s most popular driver, was now a Cup champion, too.

He came upon teammate Jimmie Johnson, who banged doors with Elliott. Then the seven-time champion, in his final race, gave Elliott a fist bump.

The torch has officially been passed.

This is NASCAR’s Camelot.

Elliott did what Dale Earnhardt Jr. could not and parlayed the popularity gleamed off his Hall of Fame father into a NASCAR championship. The son of “Awesome Bill from Dawsonville” Georgia solidified himself as the new face of Hendrick Motorsports, of Chevrolet and of NASCAR on the day the greatest driver of this generation called it a career.

Elliott drove from the back of the field to victory lane at Phoenix to win for Hendrick and Chevrolet, which had been shut out of the title race since Johnson won his seventh and final crown in 2016.

“I just never would have thought that this year would have gone like it has,” Elliott said. “I mean, NASCAR Cup Series champion, are you kidding me? Unreal.”

He shared a long hug with Johnson, who joined Elliott for the victory celebration.

“Oh my gosh, I mean, to share a moment like that, Jimmie’s last race, to win and lock the championship,” said Elliott, “those are moments you can only dream, you know, and this is a dream.

“Just hoping I don’t ever wake up.”

Elliott’s car failed pre-race inspection and the penalty cost him the pole when he was sent to the rear. But he raced his way through traffic in the first stage and then took control of the championship. Elliott led seven times for a race-high 153 laps.

Johnson finished fifth — his best result since August — in his final ride in Hendrick’s No. 48 Chevrolet.

“My heart is full,” said Johnson, who is tied with Hall of Famers Richard Petty and Dale Earnhardt with seven titles. His 83 victories rank sixth on the career wins list and his stretch of five consecutive titles from 2006-2010 is a NASCAR record.

Asked what he will remember about his 686th race, Johnson said it will be Elliott’s breakthrough.

“Chase Elliott won his first championship. I’m so happy for that guy,” he said. “I can recall going snowboarding with Bill out in Colorado and Chase was maybe 8 years old on skis, super quiet, wouldn’t say much.

“To watch him grow up and to be around him and to give him some advice from time to time has really been meaningful for me. I think more about him winning a championship more than anything.”

Elliott, who turns 25 later this month, has followed his father’s footsteps. Bill Elliott won the 1988 championship and 16 times was voted by the fans NASCAR’s most popular driver.

Chase Elliott became the fan favorite in 2018 after Earnhardt Jr. retired. He’s the first most popular driver to win the championship since his father won his only title.

The Elliotts joined Lee and Richard Petty and Ned and Dale Jarrett as just the third father-son combination to win a NASCAR Cup title. The Elliotts, along with Hall of Famer Tim Flock, are the only three drivers from Georgia to win the title.

Hendrick Motorsports extended its NASCAR record with a 13th championship.

Elliott passed Joey Logano with 42 laps remaining and pulled away in a race Elliott controlled even as the four title contenders ran 1-2-3-4 most of the afternoon. Elliott had charged through the field during the first stage to clump the four contenders in the winner-take-all season finale.

It was Elliott’s fifth win of the season, trailing only Kevin Harvick (nine) and Denny Hamlin (seven). Elliott’s win at Martinsville last week not only locked him into the final four, but eliminated regular-season champion Harvick.

“I felt like we took some really big strides this year, and last week was a huge one,” said Elliott, who won five races this season. “To come out of that with a win and a shot to come here and have a chance to race is unbelievable.”

Elliott beat Brad Keselowski, who was followed by Team Penske teammate Logano and then Hamlin, who is now 0-for-4 in title races. Hamlin is considered along with Hall of Famer Mark Martin the best driver without a Cup title.

“No one has won more than we have over the last two years. Pretty proud what this team is doing,” Hamlin said. “We’ll come back and do it again next year.”

Hamlin was the only driver among the final four not to lead a lap at Phoenix, where he won last November.

Logano led 125 laps, but most of them early.

“It stings not winning, I’m not going to lie. It hurts,” he said.

Keselowski had been holding out hope for a late caution to set up a short sprint to the finish, which is how both the Truck Series and Xfinity Series titles were decided the previous two nights.

“I would have loved to have raced it out,” Keselowski said. “We just didn’t get any yellows.”

The race had just four total cautions, three of them scheduled breaks. It made Elliott’s coronation look easy.

The race completed NASCAR’s frenzied 38-race schedule that was overhauled because of the pandemic. The season was suspended five days after NASCAR raced at Phoenix in March, a race won by Logano, and the engines idled for 10 weeks.

But facing crippling financial losses to the teams and the industry, NASCAR was one of the first sports to resume competition. NASCAR went racing again May 17 and used doubleheaders, midweek races and a massive scheduling shuffle to complete the season for all three of its national series.

For the finale, the first one at NASCAR’s owned and remodeled Phoenix Raceway, NASCAR loosened its “bubble” and allowed families and guests for the first time since, well, the last time they raced at Phoenix. The post-race celebration was the first time Johnson had seen Rick Hendrick, his boss of 20 years, since March.

“If you can get through a year like this and you’re NASCAR, certainly it bodes well,” Keselowski said. “I thought it was really amazing what the sport was able to achieve, that we were able to get all the races in. To be here today and have a great race for a championship, I think that’s really impressive.”

TAMPA, Fla. (AP) — Drew Brees vs. Tom Brady, and the battle for supremacy of the NFC South, was a... read more