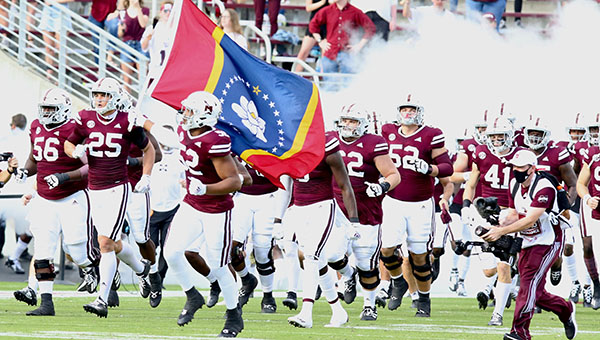 Mississippi State players run onto the field before last weekend’s game vs. Vanderbilt. The Bulldogs’ next game, this Saturday at Auburn, has been postponed because of positive COVID-19 tests among the players. (Mansel Guerry/Mississippi State Athletics)

STARKVILLE — For the second time this season, COVID-19 is sweeping across the Southeastern Conference.

Mississippi State announced it has postponed Saturday’s game against No. 20 Auburn because of a wave of positive tests, while LSU and No. 5 Texas A&M are also dealing with outbreaks.

Mississippi State Director of Athletics John Cohen said in a statement that the positive tests, other injuries and required quarantines would put the Bulldogs below the minimum threshold of 53 available scholarship players required by the Southeastern Conference.

The game between Mississippi State and Auburn has tentatively been reschedulef for Dec. 12, and will remain in Starkville.

“Based on positive tests and those considered as close contacts, along with non-COVID injuries, we do not have the minimum number of scholarship student-athletes available for Saturday’s game against Auburn,” Cohen said in a statement. “While we are disappointed that Saturday’s game has been postponed, our priority is the health, safety and well-being of our student-athletes and staff. We will continue to follow all established protocols and evaluate the most responsible path to return to the field.”

Five SEC games were rescheduled in mid-October because of COVID-19 outbreaks at several schools, and Monday brought a fresh batch of bad news.

LSU coach Ed Orgeron said Monday that his team is contending with an outbreak and resulting quarantines that have made it difficult to know whether a number of starters or regulars will be available for Saturday’s game against No. 1 Alabama — or whether the game might need to be postponed.

While Orgeron stressed he wanted to be cautious about answering medical questions and didn’t want to get into the number of players affected by the team’s latest outbreak, he noted that the problem went beyond the number of positive COVID-19 tests. The number of related quarantines due to possible exposure also have thinned his roster in recent days, he said.

By the middle of the week, LSU expects to know if the game could still be held this weekend as scheduled, Orgeron said.

“It’s going to be challenging, obviously with the guys that are out,” Orgeron said. “When they tell me we’re at a certain number or something like that — we can play or we can’t play — I think that’s up to the league … but for right now, we’re playing Alabama.”

No. 5 Texas A&M, meanwhile, paused in-person activities on Monday after a player and a staff member tested positive for COVID-19 after returning from a win at South Carolina.

Coach Jimbo Fisher said the Aggies (5-1) would not do anything on campus Monday and would instead conduct all work through Zoom sessions. He said the team was undergoing additional testing and contact tracing on Monday to see if the coronavirus had spread.

“We’re trying to prevent that,” he said. “We’re doing everything from a safety issue with our players and our staff to keep them as safe as possible.”

Fisher said he hoped his team could return to campus on Tuesday. He was also confident that the Aggies would be able to play Saturday at Tennessee (2-4), but he wouldn’t know for sure until they had completed testing and contact tracing.

Four Down Territory: It’s hard to repeat in Class 6A, Harris back on field for Colts, and no one runs…

You’re in Four Down Territory. Each week we’ll highlight four notes, nuggets, stats and trends from the weekend that was... read more