Warrior Bonfire reaches milestone in its services to those who served 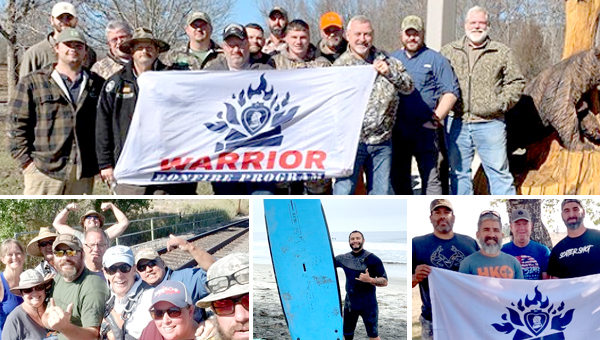 Since that first event — a deer hunt at Valley Park — the Warrior Bonfire Program has served 650 veterans and 47 spouses and sponsored 100 programs in 21 states.

“My brother Hunter and I started this basically to get guys out of the house and take them deer hunting. We’ve got a nice place in Valley Park to go deer hunting and we’ve got a place in Colorado for snow skiing,” Dan said. “We never thought about it going this far — where it was going to end up; that was not in the plan when we started this thing.

“We just tried to get a hold of some guys to try and get them out of the house and go show them a good time. We were both in the Army and we appreciate and we love veterans.”

It was at that first deer hunt, he said, that he and Hunter quickly realized there was more than a group of men hunting; it was a way for veterans to discuss their problems with men who have been in the same situation.

“We kind of stumbled on a formula that works really, really well,” he said. “All of the veterans who have come tell us this is the best, most therapeutic thing they’ve ever done.”

The program’s name, Dan said, comes from a conversation he had with Greg Williams, a wounded combat veteran who was the inspiration for the program.

Williams, he said, “Told me he could spend eight hours with a Ph.D. certified counselor but what he really needed was an hour around a bonfire with five or six of his buddies who were there.”

Six veterans, he said, “Is our magic number. We keep it small, we keep it intimate, we keep it personal and that just works really, really well.

What makes the program work, Dan said, is the relationship between the veterans.

“I did not see combat, but I can tell you my best friends to this day are the guys that I served with; more so than the guys I live with in Vicksburg,” he said. “The camaraderie that we built in peacetime still kind of amazes me when I think of it and the camaraderie in combat is 10 times that. The reason for that is that these guys would give up their lives for their buddies, and that builds a camaraderie that unless you’ve been there you just cannot understand it.”

Dan said, too, that it does not take long for the veterans to get comfortable with those they may not know, but those they share so much in common with.

“That’s what makes this whole thing special. When we get together it allows them to be able to get back in that groove, back in that level of camaraderie and they want to help their brothers who have issues going on,” he said. “I’ve seen the exchange around the table more times than I can tell you about and it’s always the same thing. They’re out trying to help each other, and I can’t tell from the exchange who is being helped the most. It’s at least equally as good for both of them.”

Fordice said the program has often worked with spouses, who he believes to a large degree have it worse than the veterans “because the veterans are out there being part of something bigger than themselves and the spouses are at home every day worrying about their loved ones not knowing what the situation is every day.”

He recalled his experience with his son, Nathan, whose Army unit was deployed to Africa.

“It is a very nerve-wracking time because you wake up every morning and you have no idea if he’s in good shape or if something has happened and you’re waiting on a call from the military,” Dan said. “That’s hard to live with every day and that’s what the spouses are living with. They’re back here and they’re the ones dealing with the sick kids, they’re the ones dealing with when the pipes break and there’s a plumbing problem, and their guys are in harm’s way but they’re also with their second families; they’re with their brothers.”

He said the program is reaching out to the spouses through couples events.

“We do a lot of after-action reviews because what we want to know from them is, did this serve your needs, did this help you at all, what can we do to make this better so we can help your healing and help your adjustment to life better,” he said.

The Warrior Bonfire Program is a 501(c)(3) program with two paid employees.

“We have a low overhead,” Dan said, “We’re putting everything we can into the veterans.”

He said the program has received offers from people to use lodges or a place to hold events, “But that’s an excuse to get them out and get them to come together; there’s always tears shed at some point during the weekend and some of them are very powerful weekends.”