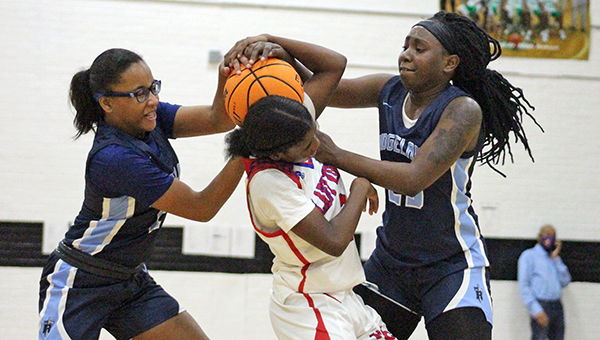 The Lady Vikes let an early double-digit lead slip away in the second quarter, and then were shut out in the fourth and lost 48-36 in their home opener against Ridgeland.

Katelyn Brinkley scored 16 of her game-high 20 points in the first half for Ridgeland, and Destiny Owah scored 12. Owah and Kymtaeshia Snow each scored six points in the fourth quarter, when Ridgeland outscored Warren Central 16-0.

“We got cold, ran out of gas … pick one,” said Warren Central coach Darein Hilliard, who only has one senior on his roster. “We just didn’t finish the deal. Our youth is still getting in the way and it’s causing us to have these lapses. We have a full schedule. Hopefully we can get this worked out as we go down this schedule.”

Ta’Mya Sims led Warren Central (1-2) with 13 points. Alaila Bracey, Zykerri Segrest and Jamaiya Sanders added seven apiece, but the Lady Vikes were unable to sustain their momentum after fast starts to each half.

Sanders and Sims hit back-to-back 3-pointers late in the first quarter to put Warren Central ahead 15-4. Ridgeland, however, went on a 13-2 run after that and went into halftime tied at 24.

The Lady Vikes then opened the third quarter with an 8-0 run and went into the final period with a 36-32 lead. Then they did not score again, as Ridgeland first overtook them on the scoreboard and then put the game out of reach.

“There was some good stuff, but then that youth sometimes gets in the way and we start turning the ball over. Which is, of course, the Achilles heel that we cannot seem to get out of the way,” Hilliard said. “The turnovers are what killed us. We’ll keep working on it and try to get better.”

Hilliard said some of the Lady Vikes’ early-season struggles have been caused by a lack of offseason work. The team’s spring and summer practice periods were both wiped out because of the COVID-19 pandemic, and they only returned to the court a few weeks ago.

The Lady Vikes will have a chance to make up some ground, though. They have four more games scheduled before Thanksgiving, starting Thursday night at Germantown.

“We didn’t have a spring or a summer to work on developing them. We’ve been at it about three weeks. They haven’t grown much from when the season ended last year until this point right now. It’s a lot of reps that we missed,” Hilliard said.