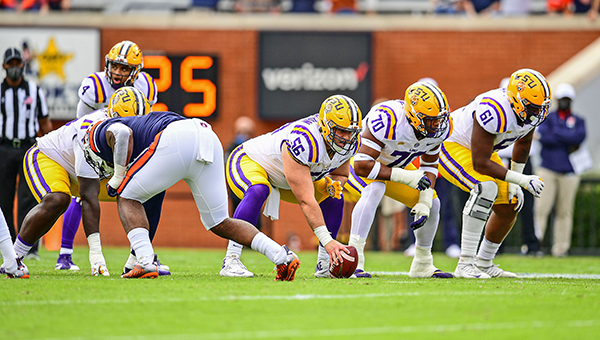 BIRMINGHAM, Ala. (AP) — The Southeastern Conference schedule has taken another big hit from COVID-19.

The conference announced Wednesday that Georgia’s game at Missouri has been postponed, making four of the seven games originally on this weekend’s schedule that have been called off because of COVID-19 outbreaks.

No. 1 Alabama at LSU, and No. 5 Texas A&M at Tennessee were both postponed on Tuesday. Mississippi State’s game against Auburn was postponed on Monday.

The SEC said Tuesday that the Aggies and Volunteers will be rescheduled for Dec. 12, but the Crimson Tide’s game against the defending national champion Tigers is in danger of not being played at all after COVID-19 cases in LSU’s program.

The Georgia-Missouri game might also be canceled rather than postponed because Missouri has another game scheduled on Dec. 12 — a home game vs. Vanderbilt that was pushed back from October because of a previous COVID outbreak.

“While it is unfortunate to have multiple postponements in the same week, we began the season with the understanding interruptions to the schedule were possible and we have remained focused throughout the season on the health of everyone around our programs,” SEC Commissioner Greg Sankey said in a statement. “We must remain vigilant, within our programs and in our communities, to prevent the spread of the virus and to manage activities that contribute to these interruptions.”

Both Alabama and LSU are coming off their open dates. LSU already has a game against No. 6 Florida scheduled for Dec. 12 that had to be postponed last month because of an outbreak that shut down the Gators for two week.

The SEC said it would consider using Dec. 19, the day of the conference championship game in Atlanta, to make up regular-season games not involving teams playing for the title. Alabama, however, is leading the West Division and seems likely to earn a spot in the championship game. Florida is also leading the East Division, which would prevent them from potentially rescheduling the LSU-Florida game again.

Texas A&M said it has three active COVID-19 cases, including two people who traveled with the team to South Carolina last week.

“The nature of away game travel (flights, meals, lodging, locker room, etc.) naturally leads to an increase in the number of student-athletes, coaches and staff who meet the criteria for mandatory quarantine based on contact tracing guidelines,” Texas A&M athletic director Ross Bjork said.

On Monday, No. 24 Auburn’s game at Mississippi State was postponed because of COVID-19 positive tests and contact tracing within the Bulldogs’ program. That game has been tentatively rescheduled for Dec. 12.

Mississippi State head coach Mike Leach said the Bulldogs only had 54 scholarship players available for last weekend’s 24-17 win over Vanderbilt. The minimum allowed under the SEC’s COVID-19 guidelines is 53.

Auburn also has “a handful of close contact” cases having to quarantine, in addition to the positive tests, coach Gus Malzahn said. He didn’t give a specific number or say which positions had been hardest hit.

Auburn, which is coming off an open date, is next scheduled to host Tennessee on Nov. 21.

It was also confirmed Tuesday that Arkansas coach Sam Pittman will miss the Razorbacks’ game at No. 6 Florida on Saturday after having two positive COVID-19 tests. Pittman first tested positive Sunday and has reported no symptoms. SEC protocols require him to isolate for at least 10 days. Defensive coordinator Barry Odom will serve as head coach against Florida.

In the American Athletic Conference, Navy’s game at Memphis on Saturday was postponed because of positive COVID-19 tests at the Naval Academy.

The total number of games involving FBS programs that have been canceled or postponed since Aug. 26 is 52.

Alabama-LSU is typically one of the most anticipated games of the college football season. Last year, the Tigers broke an eight-game long losing streak in the series and won a thriller in Tuscaloosa that propelled them to an SEC championship and national title.

The matchup has lost its luster this season, with LSU stumbling to a 2-3 record and Alabama favored by more than three touchdowns.

This year’s game was scheduled to kick off at 5 p.m. and be broadcast by CBS, following the network’s coverage of the Masters. The pandemic forced the golf major to be postponed from April. Now CBS will not carry an SEC game this weekend.

Alabama’s next game is Nov. 21 at home against Kentucky.

It’s the second week in a row that Navy had a game postponed because of positive coronavirus tests at the Academy and the subsequent quarantine of student-athletes. The Midshipmen were scheduled to host Tulsa last weekend before that game was called off.

Navy has not been on the field since Nov. 2 and has not had a regular practice since Oct. 29.

The American has not announced potential makeup dates for Saturday’s game or the Tulsa-Navy game. Memphis and Navy do not share a common open date through the rest of the season.

The AAC did announce that a previously rescheduled game between No. 7 Cincinnati and Tulsa will be played Friday, Dec. 4, instead of Saturday, Dec. 5.

DeMichael Harris’ NFL apprenticeship is officially over. After spending the first two months of the season on the practice squad,... read more