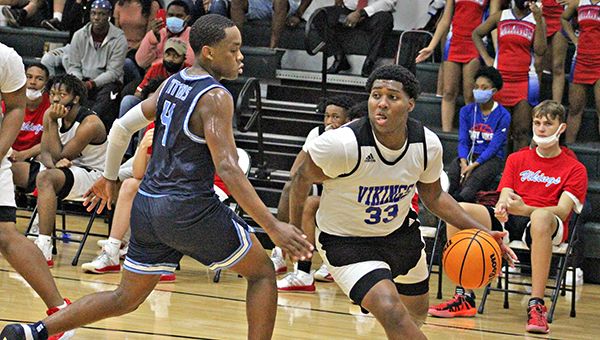 Warren Central’s Darlton Allen (33) drives the baseline against Ridgeland’s Jaffar Graves-Haynes in the second half of Tuesday’s game. Allen finished with 15 points, but the Vikings lost 52-45. (Ernest Bowker/The Vicksburg Post)

After trailing by 14 points late in the third quarter, Warren Central pulled it together and almost pulled off a huge comeback Tuesday night against Ridgeland.

The Vikings chopped their deficit down to two, and then went nearly three minutes without scoring down the stretch. The late lull allowed Ridgeland to pull away again, and it escaped with a 52-45 victory.

“It was good in spots. We started out slow, we got up at the half, we thought we had them where we wanted them. But we still can’t make a whole lot of excuses. We should have won that ballgame,” Warren Central coach Bruce Robinson said.

Decarlos Wilson scored 16 of his 20 points in the second half to lead Ridgeland (1-1), while Jaffar Graves-Haynes added 11 and Marqiel Thompson scored seven. Graves-Haynes hit three 3-pointers in the third quarter as the Titans turned a five-point halftime deficit into a 38-24 lead with a minute to go.

“We talked about rhythm in the locker room, on offense. Our defense wasn’t so bad. We like to keep them under 50 points and we were right there. On offense you have to get in a rhythm, and we’re not in a rhythm,” Robinson said. “We’re still working on, I guess, identity. I thought we played hard, for the most part. We played with some grit. I think they got a little tougher than we did. You have to keep your focus at all times.”

Del’Jayvien Harried came up with two steals that he converted to layups in the final 20 seconds of the third quarter, and Warren Central kept surging in the fourth. It got as close as 45-43 on a basket by Darlton Allen with just over three minutes remaining and then went cold.

After Allen’s basket, the Vikings did not score again until Harried drove into the lane and made a layup with 10 seconds to go. Ridgeland had gone on a 7-0 run in the meantime, and got away with the 52-45 victory.

“We made bad decisions with the ball. We had the ball in the right people’s hands, and they have to make the right decisions with it,” Robinson said. “But we’re not playing with a group of experienced guys. We’re playing with maybe two guys that played a lot last year. So it’s going to take a little while to come together. We’ve got to get those guys to understand that.”

Warren Central (1-1) will have a long time to work on that. After playing two games in five days, the Vikings have 3 ½ weeks until their next one. Although the girls’ team has four more games scheduled in November, the boys don’t play again until Dec. 5 at archrival Vicksburg.

Robinson said the long gap between games was by design, to help avoid exposure and cancellations related to COVID-19. Without a true home gym — Warren Central is playing most of its home games at Vicksburg Junior High because of ongoing construction at the high school — it is also a schedule laden with road games. Warren Central’s boys’ team has 15 games scheduled. Only two games before New Year’s, the one against Ridgeland and another on Dec. 17 vs. Brookhaven, are at home.

With COVID-19 cases again starting to spike in Mississippi, Robinson said he was happy to play whatever games he can.

“It’s only two games. We’ve got to fix what we can fix. It only counts in January. But in the age of COVID, I look at my Twitter feed and everybody is canceling. So being able to play tonight is a victory within itself,” he said.