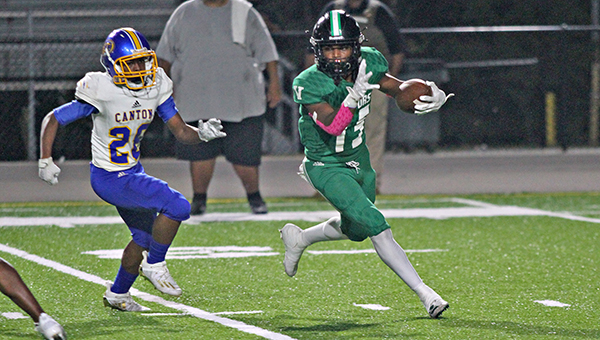 Vicksburg High’s Keveon Smith (15) will lead the Gators against Grenada in the first round of the MHSAA Class 5A playoffs on Friday. (Courtland Wells/The Vicksburg Post)

Gators look to spring upset against Grenada in Class 5A playoffs

When the playoffs begin, coaches are fond of reminding their players that everyone has a 0-0 record and that all anyone needs is confidence and an opportunity.

The Gators (4-7) are the only team in the MHSAA Class 5A playoffs with a losing record, but have held their own against some of the best teams in the state. Knowing they can compete, coach Todd McDaniel said, has given the Gators plenty of confidence heading into Friday’s first-round playoff matchup against Grenada (7-2), and that they have an answer to the age old question, “Why not us?”

“Our district is extremely tough. The top two teams in 5A are coming out of our district, with Ridgeland and Neshoba, and Holmes County Central is no slouch,” McDaniel said. “You look at those three teams, and they’re some of the better teams in 5A football. For us to go out there and compete with them, and make them play a whole four quarters to beat us, says a lot about our young football team. Still in all, we want to win those games and for us to be in the playoffs it’s really a third season.”

Grenada enters the playoffs as the Region 1-5A champion, but on paper might be the best possible first-round matchup for Vicksburg. The Chargers feature the kind of run-oriented offense Vicksburg’s defense has had success against this season, and they also have not played since Oct. 23.

Grenada won three games in a row by a total of 16 points, and then picked up two COVID-related forfeit wins over Center Hill and New Hope to clinch its first region championship since 2015.

McDaniel certainly did not downplay the challenge Grenada poses, but did say he thinks his Gators are in a good position based off of the opposition they’ve seen so far. Grenada is the seventh of Vicksburg’s 10 opponents that qualified for the postseason.

“Grenada has a really good quarterback and a very good offensive line. The quarterback is the best player on the football team. They depend on him to do a lot of running. They’re very similar to us. They’re not going to throw the ball a whole, whole lot. When they do throw it, people are wide open. The defense is stout. They fly to the football,” McDaniel said. “I can say that we have been battle-tested. We shouldn’t be intimidated playing against Grenada, because we have played some of the best teams in the state of Mississippi.”

No matter what happens, McDaniel said just making the playoffs is a big step forward for Vicksburg’s football program. It is the team’s first postseason berth since 2017, which means it will be the first time the seniors have appeared in a playoff game. The Gators also have played as many as nine freshmen this season, which will provide valuable experience for the future.

“I’m elated about that. That’s one of the things they (seniors) talked about earlier this year. We would have loved to have had more W’s in the win column, but we saw tremendous growth in the entire program and the wins will come. They just don’t always come when you want them to come,” said McDaniel, who is in his first season as Vicksburg’s coach. “This trip in the playoffs, you never know what can happen. We’ve got an idea of what’s really going on on the field. The kids have played hard all year long. They’ve showed tremendous resolve. But it would be nice to get our first (playoff) win in a while.”

VICKSBURG AT GRENADA
• MHSAA Class 5A playoffs
• Friday, 7 p.m.
• Radio: 107.7 FM/1490 AM
• For full coverage, visit vicksburgpost.com and follow us at facebook.com/thevicksburgpost and twitter.com/vixpostsports

Vicksburg High’s boys’ basketball team and its varsity cheerleading squad have been put in a timeout because of COVID-19. Four... read more