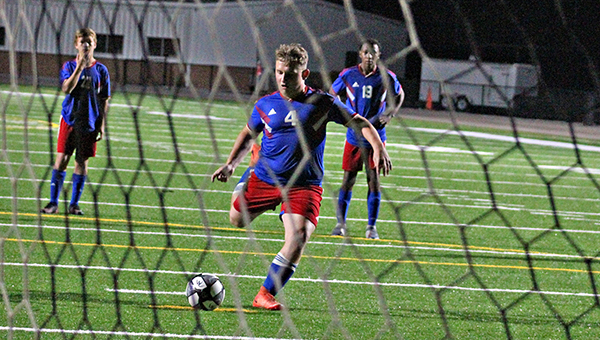 Warren Central’s Peyton Davidson (4) takes a penalty kick in the first half of Thursday’s game against Crystal Springs. Davidson scored on the kick to help the Vikings along their way to a 10-0 victory. (Ernest Bowker/The Vicksburg Post)

According to the schedule, Warren Central’s boys’ soccer team was playing Crystal Springs on Thursday night. In reality, the Vikings were playing Northwest Rankin, Clinton, Madison Central and any number of other top-flight opponents they’ll have to face later on.

Tony King scored three goals and assisted on another, and seven other players scored one goal apiece as the Vikings hammered an overmatched Crystal Springs squad 10-0.

Warren Central coach Greg Head said that what the game lacked in competition, it made up for as an opportunity to work on some tactics and techniques that will be needed in bigger games in December and January.

Warren Central (5-1) took 28 shots in the 50-minute game, and did not allow any. The Vikings sent a number of shots high or wide of the net in the early going, before King broke the ice in the seventh minute. Munir Shuaibi got the second goal a minute later, and the floodgates gradually opened.

Adie Keller, Jordan Polk, Melissa Herrle, Shelby Hasty, Alana Hearn, Adi Leist and Alyssa Bordelon each scored one goal for Warren Central (4-2). All of them, plus a few more players, are new to the lineup this season. The Lady Vikes had to replace all 11 starters from last the 2019-20 roster, and Head said Thursday’s game was a prime opportunity to both build confidence and learn a few important lessons.

“With 11 new girls, it’s good to play somebody like this because you get used to playing together,” Head said. “When you get a whole new team out there, nobody has played with anybody. So it was good for them because they learned to work the ball. You don’t always have to go forward. Drop it back when you need to.”

Gators look to spring upset against Grenada in Class 5A playoffs

When the playoffs begin, coaches are fond of reminding their players that everyone has a 0-0 record and that all... read more