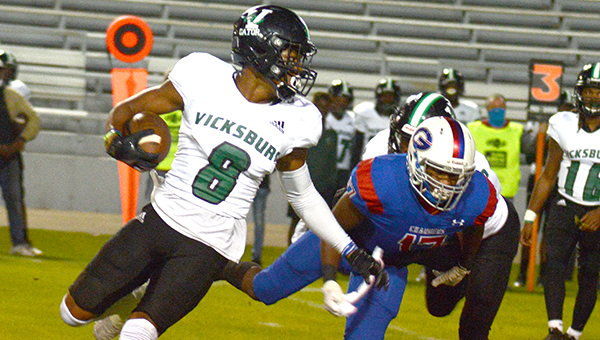 Vicksburg High ended a three-year absence from the playoffs. It will have to wait a while longer to end its losing streak.

Joe Moss ran for two touchdowns, and Grenada used a steady stream of big plays to beat the Gators 31-14 in the first round of the MHSAA Class 5A playoffs on Friday night.

Grenada (8-2) advanced to face West Point (8-3) in the second round next week. West Point, the four-time defending Class 5A champion, beat Holmes County Central 42-28 on Friday.

Vicksburg (4-8) made its first postseason appearance since 2017, but has not won a playoff game since 2008. It has been one-and-done for the Gators in five appearances since then.

“I wish we could have gotten a few more wins in the win column, but we did have a lot of growth. My ninth-grade quarterback played extremely well tonight. We had some other skill folks that played extremely well tonight,” Vicksburg coach Todd McDaniel said. “All in all, the season didn’t end the way we wanted it to, because there’s only going to be one champion crowned at the end of the year. Most teams are going to end that way. We have a lot of work to do, but we have a foundation to build upon.”

Moss scored on a 23-yard run on Grenada’s first possession Friday night, and added a 5-yard TD run just before halftime to make it 21-0. Jadarius Steen had a 30-yard touchdown run in between.

The Chargers, though, did not fully take control of the game until late in the third quarter.

Vicksburg recovered a fumble and converted it into a 22-yard touchdown pass from Ronnie Alexander to Keveon Smith for their first points of the game. On Grenada’s next offensive snap, however, Moss broke off a 50-yard run to the Vicksburg 14-yard line to set up a field goal by Jacob Chavis.

“We have to work on our mental edge,” McDaniel said. “It’s not really about the X’s and O’s, it’s about us believing we can go into anywhere and win a football game. We had one good play and then a bad play. We have to build consistency as far as that’s concerned.”

Vicksburg attempted a fake punt from deep in its territory on its next possession and did not get it. Fullback Nick Stewart burst up the middle for a 30-yard touchdown on the next play to put Grenada ahead 31-7 and effectively put the game out of reach.

The Gators did score on a 1-yard run by Alexander with 8:34 left in the fourth quarter, but weren’t able to carve any deeper into the big deficit. The Gators’ last offensive possession reached the 25-yard line before a couple of sacks pushed them back.

“You’d prefer to run that fake punt near midfield, but I think our special teams coordinator figured that time was burning and we were trying to keep a drive going,” McDaniel said. “It’s the last game of the year. Either you win or you go home, so we were trying to get a spark.”

RAYMOND — Hinds Community College will have to wait and see whether it will play another football game this season.... read more