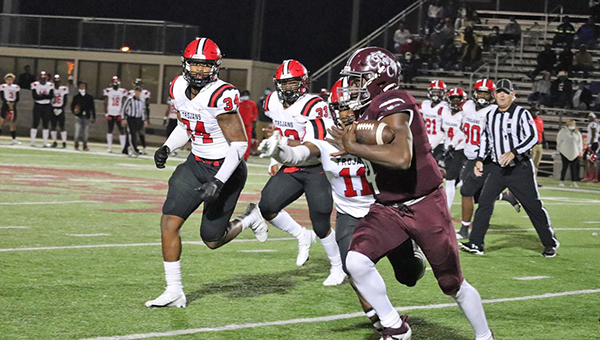 RAYMOND — Hinds Community College will have to wait and see whether it will play another football game this season. If not, then it at least went out a winner.

McCray finished 11-of-21 passing for 142 yards, with a 12-yard TD to Niselbyion Kirk and a 28-yarder to Jakarius Caston. He also had nine rushing attempts for 67 yards, with most of it coming on a 42-yard touchdown in the third quarter.

Richard got nearly half of his yards on an 80-yard touchdown early in the first quarter.

Pearl River’s defense scored both of its touchdowns. Noah Mitchell and Damien Lynch returned a pair of fumbles 13 and 6 yards for touchdowns. Mitchell also had 15 tackles.

Hinds’ last two games of the 2020 season were supposed to be against East Central and Copiah-Lincoln, but both opponents have canceled the remainder of their seasons because of COVID-19 concerns. It has not yet been determined whether Hinds will play another game.

Coahoma 17, Mississippi Delta 13
Keaundre McCullough rushed for 85 yards and a touchdown, a 38-yarder with seven minutes left that gave Coahoma Community College the lead for good, and the Tigers beat Mississippi Delta.

Markell Young had an 18-yard touchdown run for Coahoma (3-2) earlier in the game.

Kelvin Smith ran for a touchdown for Mississippi Delta (0-3), and LaDarius Moore caught a touchdown pass from Freddie Byrd in the third quarter.

Northwest quarterback Michael Hiers was 16-of-19 passing for 337 yards and four touchdowns. He also had a rushing touchdown. Hiers threw touchdown passes of 39 and 77 yards to D.T. Sheffield, and a 65-yarder to Keyon Fordham as the Rangers jumped out to a 34-7 lead at halftime.

Jevon McDonald rushed for 57 yards and a touchdown for Holmes, and also threw a touchdown pass.

One of the turnovers was a 40-yard interception return for a touchdown by Tony Washington.
Payne finished with six receptions for 62 yards. Cam Coleman caught five passes for 67 yards and a touchdown. Coleman also threw a TD pass to Payne.

Northeast won at Itawamba for the first time since 2004.

Loden Bolen threw a 71-yard touchdown pass to Qua Davis, and also scored a 5-yard run for Itawamba. Bolen was 20-of-37 passing for 262 yards, with one touchdown and three interceptions. He rushed for 66 yards on 13 carries.

Jamarcus Quarles also scored on a 2-yard run for the Indians, and finished with 31 yards on 12 carries.