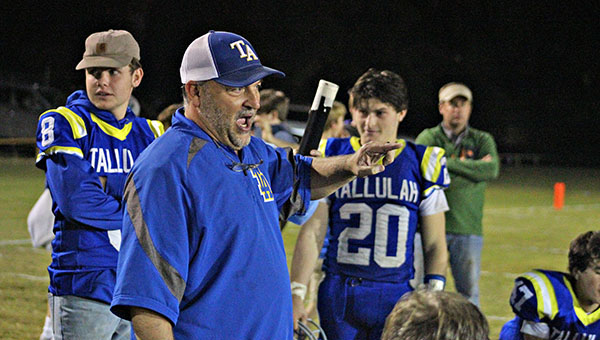 Tallulah Academy football coach Bart Wood has the Trojans in the MAIS 8-man championship game for the fifth time in seven years after they beat DeSoto School 70-52 in the semifinals on Friday. (Ernest Bowker/The Vicksburg Post)

Tallulah outlasted DeSoto School 70-52 in one Class 1A semifinal on Friday, while Briarfield beat Wilkinson County Christian 50-35 in the other to set up a clash of 8-man titans in the championship game next week.

Tallulah defeated DeSoto (11-1) in a game that had no punts. Every offensive possession by both teams ended in either a score or on downs. Tallulah got in the end zone midway through the second quarter on a touchdown reception by Marsh Wood, then held the Thunderbirds twice on downs and got an 8-yard TD run by Walker Sullivan in between to take a 38-26 lead into halftime.

Tallulah got the second half kickoff and scored another touchdown on a 9-yard run by Sullivan to make it 44-26 with 9:01 remaining. From there, the Trojans were able to hold serve and stay comfortably in front until the end.

“I don’t know if it was a shootout. It was a grinding game. It was just that we couldn’t stop each other,” Bart Wood said. “We didn’t think it was going to be that kind of game. That was not what we were expecting.”

Clinton wipes out Horn Lake, will host Warren Central next

Clinton surged to the MHSAA Region 2-6A championship, and carried its momentum right on through the first round of the... read more