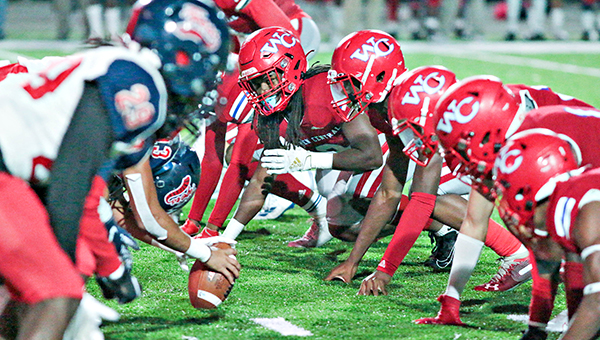 Warren Central’s defensive line awaits the snap earlier this season. The Vikings will go on the road Friday to play Tupelo in the first round of the MHSAA Class 6A playoffs. (Walter Frazier/For The Vicksburg Post)

Warren Central is no stranger to the playoffs. Its nine-year run of postseason appearances is the fourth-longest active streak in MHSAA Class 6A.

This Friday’s first-round game against Tupelo, however, will be a new experience for this group of Vikings. For the first time this season they’ll have to get on a bus and play somewhere other than Viking Stadium.

A schedule quirk, the COVID-19 pandemic and a fortuitous forfeit combined to allow Warren Central (8-2) to play every regular-season game at home. The four-hour trip to Tupelo is never easy, but WC coach Josh Morgan believes the talented opponent waiting at the end of it will be a bigger obstacle than the trip itself.

“We’re not going to make that big of a deal out of it. It’ll be our first trip, and what a trip it is. Hopefully we can handle organizing it, have a nice trip planned out, and make it in our favor,” Morgan said. “One of the biggest advantages they have is we have to travel. So we’re going to do our very best to turn that in our favor. We’ll have a good trip lined up for them and handle it the right way.”

Because of the way the annual schedule rotation fell, Warren Central had six road games in 2019 but only three on its original 2020 schedule. One by one, those were eliminated.

The season opener at Vicksburg was moved to Viking Stadium because of construction at Memorial Stadium. Greenville opted out of its season. A visit to Starkville turned into a forfeit victory because of a sudden COVID-19 outbreak. Even a preseason jamboree that was supposed to be at Madison-Ridgeland Academy was canceled when the start of the season was delayed in August.

Eventually, the Vikings wound up with a rare and bizarre all-home schedule. Friday’s playoff game against Tupelo will be the first time in 363 days that they play somewhere other than Viking Stadium. It will be a new experience for some players, and Morgan said he and his staff were trying to let them know exactly what to expect.

“We’ll definitely make it a point,” Morgan said. “With it being a playoff game and the implications that come with it, I’m not worried about it at all. Our guys will be locked in, dialed in, and we’ll expect them to handle it. A lot goes into this.”

Warren Central and Tupelo (6-4) are not regular opponents, but do have some history and common DNA in their programs. This is the eighth time they have matched up in the playoffs, with their last meeting coming in 2017.

Warren Central is making its ninth consecutive playoff appearance and Tupelo its eighth. Both, however, have had trouble making deep runs. Warren Central has not been past the second round since winning its last state championship in 1994. Tupelo reached the Class 6A championship game in 2013, but that was its only trip beyond the second round since 1995.

An early exit awaits one of them yet again, but at the same time there is plenty of hope that either can break their postseason jinx. Only two of the 16 teams in the Class 6A playoffs — defending state champion Oxford (9-0) and D’Iberville (9-0) — are still undefeated, which has created a sense of parity and opportunity.

“Especially over the last couple of years, there’s so much parity now and so many contenders. It’s a lot of good football being played, and it’s all about who catches those breaks and gets hot at the right time,” Morgan said. “Getting in is a big achievement, because anything can happen. If you get some momentum going and catch some breaks and all the things that come with it, anything can happen and it doesn’t matter your seeding and record. It’s one of those deals where if you get in, anything is possible. We’re very thankful for our season. We’re sitting in a good spot, and hopefully we can be at our best this week.”

Warren Central is entering the playoffs on a two-game losing streak that cost it a chance at the Region 2-6A championship, dropped it to the No. 3 seed, and sent it on the road for the first round.

The Vikings had an open date last week to shake off the losses, get healthy, and get prepared for the postseason. Morgan said it was a “very productive” week, and that regaining the confidence built during a seven-game winning streak to start the year was a key to success this Friday night.

“We had such a good start, and we’ve had some adversity,” he said. “I’ve seen some growth here at the last part of the year. For the most part, we’re healthy. We have to do a good job of putting it all together. We’re truly down to our last shot. We have to cling to our identity and be really good at what we do.”