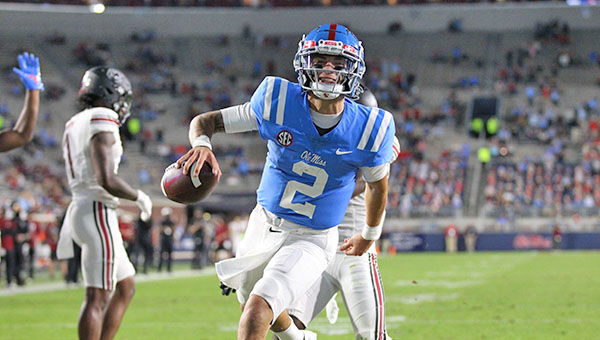 OXFORD (AP) — Matt Corral is on the hot streak of a lifetime, and Ole Miss is reaping the benefits.

Corral accounted for five touchdowns, including a go-ahead 91-yard touchdown strike to Elijah Moore in the fourth quarter, and set the single-game Ole Miss passing record as the Rebels beat South Carolina 59-42 on Saturday night.

Ole Miss (3-4) finished with 708 yards of offense, the most in school history in an SEC game. Corral finished 28-of-32 for 513 yards passing ­— a school record — including four touchdowns. Corral added a 3-yard touchdown run.

In the last two games, wins over Vanderbilt and South Carolina, Corral has completed 59 of 66 passes (89.4 percent) for 925 yards, with 10 touchdowns and no interceptions.

Ole Miss has scored 50 or more points in back-to-back games for only the second time in the program’s 127-year history. The only other time it accomplished the feat was in 2015, when it beat Tennessee-Martin 76-3 and Fresno State 73-21 in the first two games of the season.

Trailing 42-38 Saturday, Corral found a wide-open Moore waiting in the middle of the field at the South Carolina 45-yard line. Moore then turned and raced into the end zone to put Ole Miss ahead to stay, 45-42 with 12:02 remaining. The 91-yard touchdown was the longest pass play in school history.

During the play, Ole Miss coach Lane Kiffin tossed his clipboard 20 yards in the air at the catch and raced up the sidelines 30 yards before stopping to celebrate with a fist pump as Moore completed the game’s decisive play.

Moore had 13 receptions for 225 yards, including touchdown catches of 91 and 25 yards, both during the fourth-quarter surge. It was his third 200-yard game of the season, and second in a row. He has 27 receptions for 463 yards and five touchdowns in the last two games.

Ole Miss scored 21 unanswered points to finish the game. Ealy scored on a 5-yard run with 6:09 left, and Moore caught a 25-yard TD pass with 3:40 to go to put an exclamation point on the victory.

Collin Hill was 17-of-28 passing for 230 yards. He threw an 11-yard touchdown to Shi Smith, who finished with 10 receptions for 117 yards. South Carolina had 548 yards of total offense and linebacker Ernest Jones had a game-high 18 tackles.