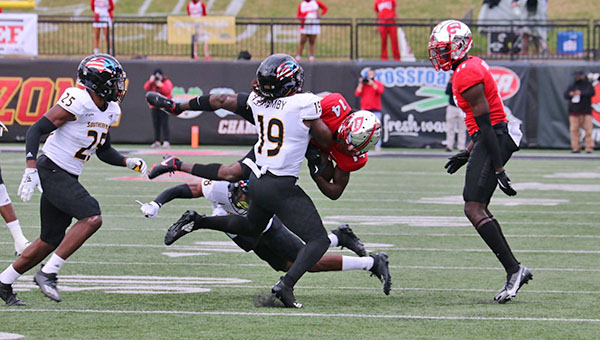 “There were some good things to take out of this. We just … seven points. These days you feel like you have to score in the mid-30s to win a football game. We’ll get there,” Southern Miss interim head coach Tim Billings said.

A fracas after the play led officials to declare the game over at that point, rather than run a meaningless play.

“That was a very intense football game on both sides. All they had to do was snap the ball and kneel down on it. I just don’t think they wanted anything else on the field and we didn’t either. We had our opportunity and we didn’t take advantage of it so with all the tempers flaring — both sides played so hard and physical that was probably a good decision.”

Pigrome faked a handoff to Gaej Walker and then ran untouched five yards into the end zone midway through the first quarter for the Hilltoppers (3-6, 2-3). Pigrome was 19-of-30 passing for 183 yards. Xavier Lane caught five passes for 90 yards.

DeAngelo Malone and Ricky Barber each had two of the Hilltoppers’ six sacks. Malone, a senior defensive end from Atlanta, now has a program-best 25 sacks.

Perkins finished with eight carries for 71 yards for Southern Miss. Trey Lowe was 6-of-14 for 67 yards passing. Lowe was playing in place of starting quarterback Jack Abraham, who was ruled out for the season earlier in the week.

Southern Miss averaged 30.2 points in its first five games, but has scored a total of 37 in its last three.

“We were just real inconsistent as far as throwing the football. That’s kind of what we’ve done and it’s a crazy thing again — Jack (Abraham) practiced as the starting quarterback until Thursday and then all of a sudden we had to revamp things on Thursday afternoon,” Billings said. “That affected the game plan a lot, but still no excuse. We’ve got to score some points.”