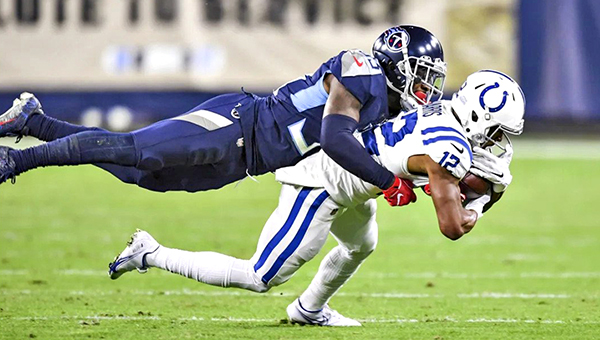 The Week 10 NFL opener between the Indianapolis Colts and Tennessee Titans on Thursday was just another game for most of the country. The Colts won 34-17 in a matchup that was important in the AFC standings, but will soon be forgotten by many people.

Here in Vicksburg, however, it was much more. It was a milestone game as two of our local football stars, Colts rookie wide receiver DeMichael Harris and Titans veteran cornerback Malcolm Butler, played each other for the first time.

Harris was signed from the practice squad to the Colts’ active roster earlier in the week, marking the first time since the early 2000s that more than one player from Vicksburg has been on an NFL roster at a given time.

Butler, of course, put Vicksburg on the map with his game-clinching interception back in Super Bowl XLIX. He has arguably brought more national attention to the city than anyone since Ulysses S. Grant.

Besides being from the same town, Harris and Butler have plenty of things in common. They personify the value of hard work and the underdog spirit that can inspire us all.

Butler’s story is famous by now. He nearly washed out of football several times after graduating from Vicksburg High School, worked at the Popeye’s on Pemberton Boulevard for a spell, earned a second chance at Hinds Community College, made the roster of the mighty New England Patriots as an undrafted free agent, and then played a key role in two Super Bowl victories.

Harris didn’t have quite the level of adversity that Butler did, but still took a long, hard road to the NFL. After starring at tiny St. Aloysius High School, he also played at Hinds and then Southern Miss before signing with the Colts as a free agent after this year’s draft.

Like Butler did in 2014 with New England, Harris made the most of his opportunities during training camp. He earned a spot on the practice squad, kept turning heads in practice, and was activated to the main roster twice before injuries and depth issues led the Colts to give him a full promotion.

Both players are, of course, extremely talented. But so are a lot of players who never make it to this level. What allowed Butler and Harris to succeed where many others failed is an internal drive that few possess.

Butler could have easily given up at any one of a half-dozen points in his career. He didn’t. Harris could have taken his cup of NFL coffee in the Colts’ training camp and been satisfied. He wasn’t. Both players saw the opportunity to fulfill their dreams, pushed a little more, worked a little harder, and got over the hump.

Now in his seventh season, Butler is a made man in the NFL. He’s had a remarkable career no matter what happens the rest of the way. Harris’ career is just beginning, but regardless of how it turns out he has earned the right to say he reached the highest level of his sport.

Thursday’s game was the first time Harris and Butler squared off on an NFL field, and it won’t be the last. The Colts and Titans play each other again in two weeks in Indianapolis, and could meet again in the playoffs. The division rivals face each other twice each season, and hopefully the two Vicksburg natives have plenty of battles ahead of them. Every time they do, let’s not forget and celebrate where they came from — not just Vicksburg, but their personal journeys from here to bigger and better things.