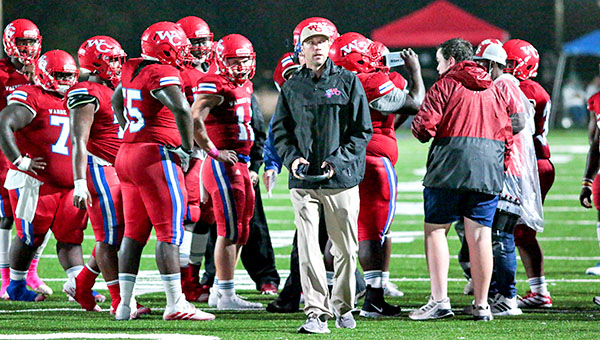 Warren Central football coach Josh Morgan walks the sideline earlier this season. The Vikings earned a forfeit win over Tupelo in the MHSAA Class 6A playoffs on Friday because of a COVID-19 outbreak among Tupelo’s team. They advanced to face Clinton this week in round two. (Walter Frazier/For The Vicksburg Post)

Four Down Territory: COVID-19 dominates the playoffs, Ole Miss QB Corral is red hot, and the Saints reach a milestone

You’re in Four Down Territory, where we examine four notes, nuggets, stats and trends from the weekend that was in Mississippi high school football, college football and the NFL.

1
With the high school playoffs well under way in the Mississippi High School Activities Association and Mid-South Association of Independent Schools, the most formidable opponent has been COVID-19.

A total of 16 playoff games — 14 in the MHSAA and two in the MAIS — have been canceled and ruled forfeits so far because of COVID-19 outbreaks involving various teams. The total amounts to 10.9 percent of the 146 playoff games scheduled so far between the two associations.

The list includes a MHSAA Class 6A first-round game between Warren Central and Tupelo, which was canceled about six hours before kickoff on Friday. Tupelo exceeded the threshold for what is considered an outbreak — a pre-set number of cases within the school that triggers a mandatory quarantine — and had to forfeit. Warren Central was declared the winner and advanced to play at Clinton this Friday at 7 p.m.

“Since June, when we started coming back, you learn to adapt,” Warren Central coach Josh Morgan said. “All we’re doing is everything we can do. We were prepared to play and would love to have played. We just didn’t get that opportunity.”

Morgan and the Vikings got the news when they were about halfway to Tupelo. They stopped for lunch, then turned around and came home. Tupelo coach Ty Hardin, meanwhile, had to tell his players that their season was over despite not losing on the field. Hardin said giving his players that message was one of the most difficult things he’s ever had to do as a coach.

“Today was one of the hardest days in my coaching career, having to tell a group of young men that their season had ended on something that was out of their control,” Hardin told the Northeast Mississippi Daily Journal. “I promised the guys that if they kept being tough, fought for our culture, and outwork everyone then we would keep playing. To break that promise hurts. They deserved to play on their terms tonight whatever the outcome may be.”

2
Jackson Prep’s status as an MAIS Class 6A power is certainly not over, but it is on a rare hiatus after a stunning loss on Friday.

Jackson Academy scored three touchdowns in the fourth quarter to beat Jackson Prep 28-21 in the Class 6A semifinals, and earn its first trip to a state championship game since 2013.
Jackson Academy (10-3) will play undefeated Madison-Ridgeland Academy (11-0) Saturday, Nov. 21, at 7 p.m. at Veterans Memorial Stadium in Jackson.

Jackson Prep, meanwhile, will not play in a championship game for only the third time in 24 seasons under head coach Ricky Black. The Patriots have won 13 state titles during Black’s tenure, and lost in the championship game eight other times. The only times they’ve failed to at least play for a title were 1997, 2010 and 2020.

3
The Southeastern Conference, long known for its dominant defenses, has embraced offense this season.

Ole Miss, Alabama and Florida are all ranked in the top 16 nationally in total offense, and their respective quarterbacks — Matt Corral, Mac Jones and Kyle Trask — are also among the top 10 in passing efficiency and yards.

Trask leads the nation with 28 passing touchdowns, and Corral is fourth with 22. Jones, Texas A&M’s Kellen Mond and Arkansas’ Feleipe Franks are tied for 13th, with 16 TDs apiece.

Corral has shot to the top of the national rankings on the strength of back-to-back big games. In wins over Vanderbilt and South Carolina over the last three weeks, Corral has completed 59 of 66 passes (89.4 percent) for 925 yards, with 10 touchdowns and no interceptions.

Corral set the Ole Miss single-game passing record in Saturday’s 59-42 win over South Carolina, with 513. He also had 20 rushing yards and a touchdown, to finish just short of Archie Manning’s school record of 540 total yards in a game. He was named the SEC’s Co-Offensive Player of the Week on Monday.

Corral also threw a 91-yard touchdown pass to Elijah Moore in the fourth quarter that was the longest in Ole Miss history.

Through seven games, Corral has completed 73.1 percent of his passes and has a 189.39 quarterback rating. Chad Kelly set the Ole Miss single-season records in both categories in 2015, with a 65.1 percent completion rate and 155.8 efficiency rating.

“If you could take out the one game somehow and if we played better defense when we were winning, we’d be talking about a guy in the Heisman race,” Ole Miss coach Lane Kiffin said at his weekly new conference on Monday. “He actually has more total yards per game than anyone in the conference including Trask. That’s pretty impressive, and just a sophomore. He made some plays that have some (Patrick) Mahomes-type of arm angles in the game, which we don’t teach that. That’s just, very few humans can do that.”

Ole Miss’ game at Texas A&M this Saturday was postponed and might not be made up. The Rebels also host Mississippi State on Nov. 28, and play at LSU on Dec. 5.

4
The New Orleans Saints beat the San Francisco 49ers 27-13 Sunday in the Superdome to achieve a franchise milestone. The win improved the Saints’ all-time home record to 207-206-1, marking the first time in the team’s 53-year history that it has had a winning record at home.

The Saints lost their first four games at Tulane Stadium in their inaugural 1967 season and have been playing catch-up ever since. They finally did it after going 78-39 in home games since 2006, when head coach Sean Payton and quarterback Drew Brees joined the team. They pulled to .500 by beating Carolina two weeks ago, and then got over the hump Sunday against the 49ers.

The Saints’ home record includes regular-season games at Tulane Stadium and the Superdome, as well as San Antonio’s Alamodome, Tiger Stadium in Baton Rouge, and Giants Stadium in New Jersey. The Saints played what were considered home games at the latter three after Hurricane Katrina damaged the Superdome in 2005. They also played one game as the home team at Wembley Stadium in London in 2008.

OXFORD — Ole Miss will have an extra week to prepare for the Egg Bowl. The Rebels’ road game at... read more