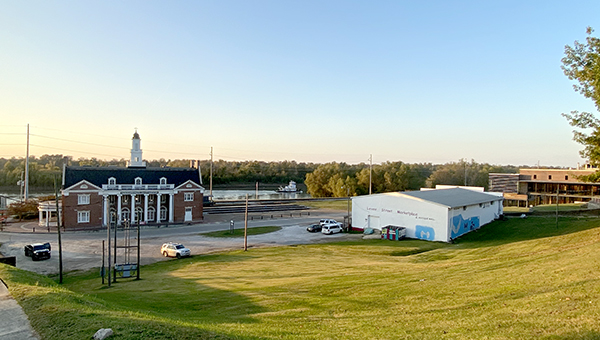 Viking Cruise Lines is leasing a 600-foot section of Vicksburg’s riverfront along the Yazoo Diversion Canal to build a docking facility for its cruise boats expected to dock at the city in 2022. (Tim Reeves/The Vicksburg Post)

Viking Cruise Lines is leasing a 600-foot section of Vicksburg’s riverfront along the Yazoo Diversion Canal to build a facility for its cruise boats expected to dock at the city in 2022.

The Board of Mayor and Aldermen Monday approved a 20-year ground lease with Viking USA LLC at a rate of $1 per passenger to use the site, which is located behind the Yazoo & Mississippi Valley Railroad Depot on Levee Street and goes north. Viking will build the dock.

“This is a lease we’ve been working on for nearly a year,” City Attorney Nancy Thomas said.

“I think it’s a great lease agreement,” Mayor George Flaggs Jr. said. “I think we’re moving forward for 2021 on the return of the cruise boats and at the same time getting a riverfront improvement without raising taxes. I think that’s phenomenal. I think that speaks well for the reputation Viking has that they lead by example.”

He said city officials are in negotiations with two other river cruise lines, American Cruise Lines and American Queen Steamboat Co. to lease riverfront space. He said the city will be looking at other improvements to the riverfront area.

“I’m waiting on a model from another city so that we can make it (the riverfront) cruise ship accessible and recreation and fishing accessible at the same time. We’re going to have to redo our riverfront approach so you just can’t park anywhere,” Flaggs said.  “We’re going to come up with a design; a structured way to reorganize our riverfront and at the same time make it more user friendly for people of Vicksburg.”

“We’re very excited to add another riverboat docking at Vicksburg and the more passengers who come and see our city the more it helps our tourism industry,” Visit Vicksburg Executive Director Laura Beth Strickland said. “These passengers come and they visit our museums and our military park and all the downtown amenities and any riverboats that want to come to Vicksburg we welcome that.”

She said Visit Vicksburg has received some tentative dates from Viking but no itinerary, and American Cruise Lines and American Queen Steam Boat Co. boats are still planning to come in 2021.

“And as soon as they are ready to come we’ll be ready to greet them,” she said.

The city of Vicksburg in April 2019 signed a letter of intent with Viking USA LLC to lease a section of the city’s riverfront to the cruise line to dock its boats.

The Viking cruises are expected to begin in August 2022.