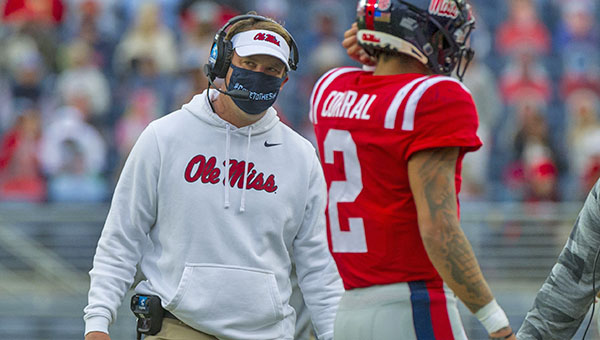 OXFORD — Ole Miss will have an extra week to prepare for the Egg Bowl.

The Rebels’ road game at Texas A&M, scheduled for Nov. 21, was postponed on Monday due to the continued quarantine of players and staff within the Texas A&M football program, the Southeastern Conference announced.

It is uncertain whether the game will be rescheduled.

Because Texas A&M has a game tentatively scheduled for Dec. 12 ­— a contest against Tennessee that was postponed last weekend — the opportunity to reschedule the Ole Miss game will be evaluated, the SEC said in a statement.

The rescheduling of games on the remaining SEC football schedule will include Dec. 19 as a playing date. The conference championship game is also scheduled for that date in Atlanta.
This is the second game in a row that Texas A&M has had postponed because of COVID-19 issues. It is the first that Ole Miss has had to postpone.

Ole Miss’ next game will be the Egg Bowl against Mississippi State, on Nov. 28 in Oxford. The SEC announced Monday that the game will be televised on the SEC Network, with a 3 p.m. kickoff.
The Rebels are scheduled to finish the regular season on Dec. 5 at LSU, although that game could also be moved.

LSU had to postpone last weekend’s game against Alabama because of COVID-19 issues within its program. SEC commissioner Greg Sankey said on CBS on Saturday that the LSU-Alabama game could be rescheduled. Sankey did not give specific dates, but it would likely involve moving the LSU-Ole Miss game to Dec. 19 and the Alabama vs. Arkansas game to Dec. 12.

Four of the seven SEC games scheduled last weekend were postponed because of COVID-19 outbreaks within various programs. Ole Miss was one of the teams that was able to play, and beat South Carolina 59-42.

A recap of performances by Vicksburg’s college football and NFL players from games played over the weekend: • Ole Miss... read more