Rippy steps away from Vicksburg Fire Department after 29 years 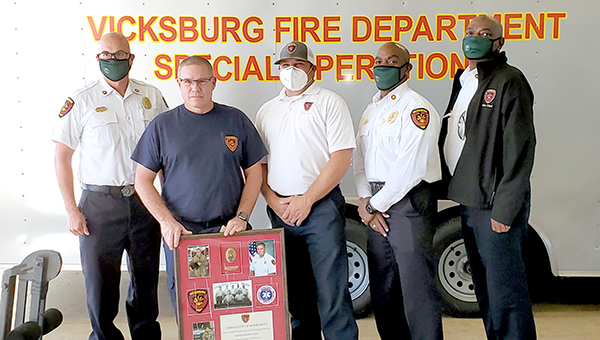 In May 1991, Randy Rippy joined the Vicksburg Fire Department as a firefighter.

Monday, 29 years later, Capt. Rippy was honored by his fellow firefighters during a party at Independence Station 3 upon his retirement.

“I almost made it to 30,” Rippy said. “I started off at Central and worked at every station, rode the ambulance for several years, rode the rescue (truck) for several years. I made lieutenant for seven years then made captain in 2002. I’ve been at Station 3 now for three years — when it opened.”

Fire Chief Craig Danczyk said Rippy was a lieutenant when he joined the department in 1995. He praised Rippy’s professional approach to the job.

“After I got out of the fire academy I had the opportunity to ride with Randy on the rescue truck and we saw every call that came through,” he said. “My first year was busy and when I worked with Randy I remember Randy was all about business.

“When the call rang you got in the truck quick, you lit it up and you got to the fire, you got to the wreck and you made a difference and I respect that,” Danczyk said.

When Rippy was at work, Danczyk said, “He was going to try and make a difference whatever it was. He’s been one of our team captains on Ladder 3 and he’s done a good job with that, he’s been an asset to the team, an asset to the department and to the community.”

North Ward Alderman Michael Mayfield said there are very few people who are able to do what firefighters do, “so when you can come to a fire department and stay here 29, 39, 40 years, that says a lot about you as an individual.

“To know that Mr. Rippy has been here 29 years, that tells me he could write a book and he could tell you some things that would probably blow your mind,” Mayfield said.

“I can’t help but take my hat off to him and many others like brother Rippy who have taken so many years from his wife and his family to work for the city of Vicksburg. That means a lot to me, that means a lot to this board,” Mayfield added. “Brother Rippy, I want to say from the Board of Mayor and Aldermen that we appreciate your service and what you personally have given to the city of Vicksburg.”

Rippy said he feels good about his retirement, adding, “Almost 30 years is a long time; that’s what we work toward.

“But I won’t be retired; just changing jobs,” he said. “I’m going to Continental Tire Co. (fire department) to work out there.”

At Continental Tire, he won’t be a stranger. Several retired Vicksburg firefighters are presently manning the fire department at the company’s sprawling manufacturing plant in Clinton.

“It’s a good step for somebody retiring from here; it’s some place you can go and continue doing what you’ve been doing for all these years but it’s a little different environment,” Rippy said.

He and his wife Doris are the parents of three daughters and a son.