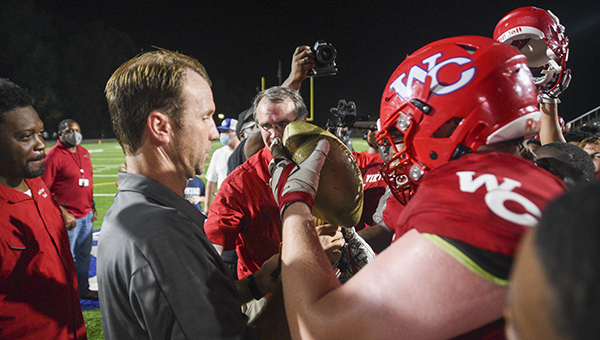 One old rivalry will be rekindled, and a more recent one will add a couple of chapters in the 2021 and 2022 Red Carpet Bowl.

The 2021 Red Carpet Bowl will be played at Vicksburg High School, and will serve as the season opener on Aug. 27. It will be the first football game in Vicksburg’s renovated Memorial Stadium, which is currently under construction.

“I think it’s going to be a couple of competitive games,” Ford said. “It’ll be a good evening for football.”

The 2021 Red Carpet Bowl matchups will remain the same in 2022. Warren Central and Vicksburg used to flip opponents for each two-year cycle, but the decision was made for the 2019-20 editions to keep the same opponents in an effort to attract more teams from the Jackson Metro area that bring more fans to the game.

The Red Carpet Bowl opponents surrender a lucrative home game in the second year of the cycle.

“It’s easy to sell the Red Carpet Bowl when you talk about how much we give to the students in this community,” Ford said. The Red Carpet Bowl funds eight scholarships worth $750 apiece to graduating high school seniors at Warren County’s four high schools. “For your good traveling teams there’s a cost to it. They give up some money to come to the Red Carpet Bowl. That says even more about it, and how much they want to do it.”

The 2021 Red Carpet Bowl opener will be Warren Central vs. Forest Hill, a couple of longtime rivals whose series has been on a long hiatus. They have played each other 30 times, but not since 2004.

Both schools opened in 1965 and their first football meeting came two years later. They were regular opponents in the Little Dixie Conference during the 1970s, and played every season from 1982-2004 either as region opponents or in non-region games. The series went on hiatus when Forest Hill moved to a different region for the 2005 season and then later dropped down a classification.

Vicksburg and Germantown, meanwhile, played every year from 2013-18 as rivals in Region 2-5A. That series also went on hiatus when Germantown moved up to Class 6A for the 2019 season. Vicksburg beat the Mavericks in 2013, but lost the next five times they played them.

“We’re happy to hopefully get in our new stadium and play a home game. Germantown has a good football team. It’ll be a very competitive game,” Vicksburg coach Todd McDaniel said.
The Red Carpet Bowl will mark the start of a new scheduling era for both Warren Central and Vicksburg.

Warren Central is moving to MHSAA Region 3-6A after spending 25 years in 2-6A. The Vikings will open against Forest Hill and play Vicksburg on Sept. 10, but coach Josh Morgan said the rest of the schedule has not yet been finalized. There will be eight new region opponents. Two of those, Brandon and Pearl, were non-region opponents the past two years, which will force Warren Central to find two new foes.

Morgan said earlier this month he would like to continue longstanding rivalries with Madison Central and Clinton, but it was uncertain whether those schools have corresponding playing dates to match up with Warren Central.

“We did reach out to both schools, and they had different reasons why they did not want to participate,” Ford said.

Vicksburg, meanwhile, will have nine region games rather than the normal eight in the revamped Region 2-5A alignment. After the opener against Germantown, the Gators will host McComb on Sept. 3 and Warren Central on Sept. 10. An open date is scheduled for Sept. 17, and the region schedule begins the following week.

“It does make a difference,” McDaniel said of having an extra region game on the schedule. “By playing three games and then jumping into district play, you don’t have as much time to prepare. But you have to play it.”