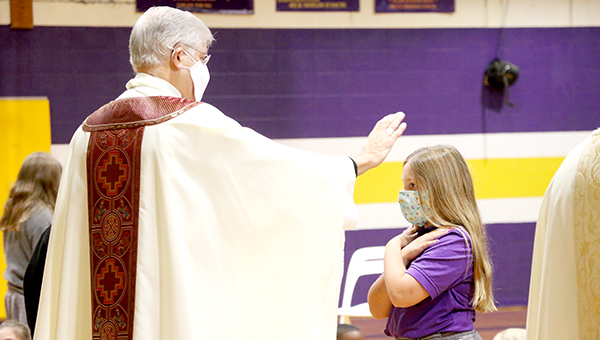 Focusing on what is good is always the better alternative than dwelling on the negatives.

That was the message Bishop Joseph Kopacz shared with students at St. Francis Xavier Elementary during the annual Thanksgiving Mass, celebrated Wednesday at the school’s gymnasium.

“These are hard times and everybody’s days have changed,” Kopacz said. “But all of it is not bad.”

Since Kopacz is not traveling as much as he once did because of the ongoing COVID-19 pandemic, he said he spends more time at home, “And I get to see my dog more and that’s a good thing.”

During the Mass, Kopacz asked the students if they could name something they were thankful for.

Answers from the students included thankfulness for more time with family, having food, and one student said they were thankful they could still come to school.

In previous years, the entire student body at Vicksburg Catholic School, which includes the high school students from St. Aloysius, celebrated the Mass. Because of the social distancing requirements set by the Centers For Disease Control, however, only the upper elementary grades — fifth- and sixth-grade students — were allowed to participate.

“They are the leaders of St. Francis,” St. Francis principal Mary Arledge said, speaking of the students who attended.

Although the Thanksgiving Mass could not be celebrated with the whole school, Arledge said it was nice for the older elementary students to have the opportunity to listen and interact with the Bishop.

Earlier this year, a Mass was said during the school’s homecoming week, Arledge said, where the high school leaders — juniors and seniors — had the opportunity to participate.

Like Kopacz, Arledge and assistant director of development at Vicksburg Catholic School Jackie Ponder said they are encouraging the students to give thanks for the small things.

“Every little thing is a blessing,” Ponder said.

“And we are thankful we are here every day,” Arledge said.