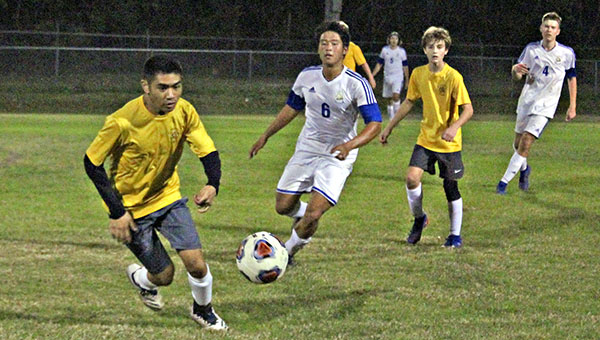 St. Aloysius’ boys’ soccer team lost quite a few key players from last year’s roster. Fortunately, the lightning-quick goal-scoring machine was not among them.

Cooper Madison scored four goals, including two in the last 17 minutes to ice the game, as St. Al opened the season with a 4-1 victory over Laurel Christian on Thursday.

Garrett Minshew scored the only goal for Laurel Christian (0-1).

Madison totaled 24 goals last season, and started this one with a hat trick-plus-one.

“He did great. Just his speed, and his speed with the ball, is what makes him dangerous,” said St. Al coach Jay Madison, Cooper’s father. “A lot of times you’ll have guys that have a lot of physicality and a lot of speed and they just don’t have the skills. He has both.”

The Flashes reached the MAIS Division III semifinals last season and replaced about half of the starting lineup. While there is a long, long way to go before the 2021 playoffs begin in February, or even the district schedule in December, Jay Madison said he likes what he sees so far.

“Last year we graduated just about the whole back line, and we had to retool all that. Not only that, but we lost our longstanding keeper and one of the best players in the state in Kieran (Theriot),” Jay Madison said, referring to 2020 Vicksburg Post Player of the Year Kieran Theriot. “Guys have had to next man up, and step up. So I’m pleased with where we are. This is a really good start.”

St. Al’s next game is Nov. 30, at Adams County Christian School. With COVID-19 cases spiking around the state, Jay Madison added that every game the Flashes get to play — win or lose — is a bonus.

“At least we got one game in on the season, and we’ll see where it goes,” he said.