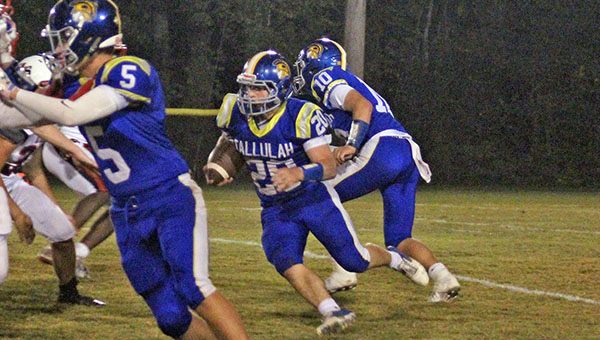 Tallulah Academy running back Carter Sullivan (20) takes a handoff. Sullivan has rushed for more than 1,100 yards and nine touchdowns this season, but has been tackled inside the 5-yard line at the end of long runs a dozen times. (Ernest Bowker/The Vicksburg Post)

JACKSON — Brothers, especially twins, are supposed to sacrifice for each other. It becomes even more of an ingrained trait when they’re teammates.

Tallulah Academy, though, would rather Carter Sullivan not share quite so much with his brother Walker — or the rest of his teammates — when it comes to football.

At least a dozen times this season, the senior running back Carter has broken off big runs only to be chased down and tackled inside the 5-yard line. Most often, it’s been at the 1- or 2-yard line and set up short touchdown opportunities for his twin brother Walker.

“After my high school career, you’re going to see me rushing for 700 yards and zero touchdowns, and (Walker) will have 80 yards with 20 touchdowns. I could say I’m a team player,” Carter said with a laugh.

Both Sullivans have had great seasons while leading the Trojans (8-3) to the MAIS Class 1A championship game Friday against archrival Briarfield (10-0). Carter leads the team in rushing yardage, with 1,148, and is averaging 14.5 yards per carry. He only has nine touchdowns, though.

When he was asked about his habit of being chased down in the open field at Monday’s MAIS championship game press conference, a group of Carter’s teammates and coaches sitting nearby broke out into laughter. After giving it some thought, a moment later he said some of it might be caused by a heavy workload.

Sullivan plays running back and linebacker, and rarely comes off the field. When he isn’t carrying the ball he is often blocking for his brother or the team’s other running back, Paul Michael Machen.

“I’m steadily blocking, and after 30 or 40 yards I get winded and I guess I slow down,” Carter said.

Because the Trojans have finished off most of the drives where Carter is tackled just short of the goal line, it has become more of a running joke among the team than an annoying habit. It’s still one they’re trying to break, however, before the Trojans play Briarfield Friday at 11 a.m. at Jackson Academy.

“We went through a walkthrough the other day and we ran it from about the 50-yard line. He stopped at the 1-yard line. I jumped all over him and told him, ‘You’ve got to get out of that habit,’” Tallulah coach Bart Wood said. “The next play we handed it to him and he ran out of the back of the end zone and all the way to the parking lot.”

ONLINE:
• All MAIS championship games will be streamed live at maisnetwork.org and broadcast on radio on 102.5 FM
• For full coverage, follow us at vicksburgpost.com, facebook.com/thevicksburgpost, and twitter.com/vixpostsports