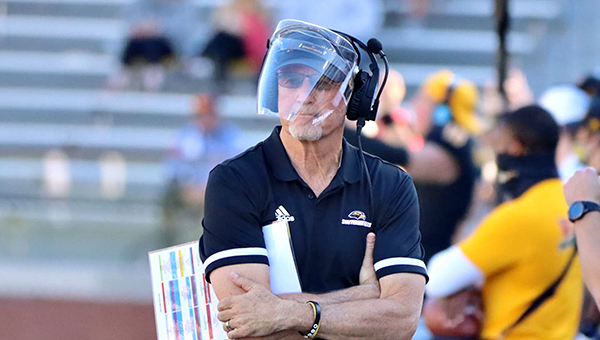 For the third time this season, Southern Miss has had to wipe a football game off the schedule because of COVID-19.

On Tuesday, Southern Miss announced that Friday’s road game at UAB has been canceled due to positive COVID-19 tests and subsequent contact tracing and quarantine protocols within the Golden Eagles’ program.

The teams were scheduled to play at 11 a.m. Friday, in what was to be UAB’s final game at Legion Field in Birmingham before moving into a new on-campus stadium in 2021.

The game will not be rescheduled. UAB (4-3, 2-1 Conference USA) does not play again until Dec. 12 at Rice, but Southern Miss has two games left on its schedule before then and no room to add another.

Southern Miss (2-7, 1-4) travels to play UTEP on Dec. 4, and hosts Florida Atlantic on Dec. 10. Both of those games were rescheduled from mid-October because of earlier COVID-19 outbreaks.

This is the third game in a row that UAB has had canceled because of COVID-19 issues. A home game against North Texas and a road trip to UTEP were both scrubbed and will not be made up because of schedule conflicts.

UAB’s last game was a 37-34, double-overtime victory over Louisiana Tech on Oct. 31.

“The two teams that we would have made up with had already scheduled games prior to our games getting canceled. Our game was canceled so late, so those two teams, North Texas and UTEP, had already rescheduled games that had been canceled,” UAB head coach Bill Clark said on Monday, before the Southern Miss cancellation was announced. “Some of the good things about us never having canceled a game turned into negative with the fact that they had already rescheduled.”

You’re in Four Down Territory, where each week we break down four notes, nuggets, stats and trends from the weekend... read more