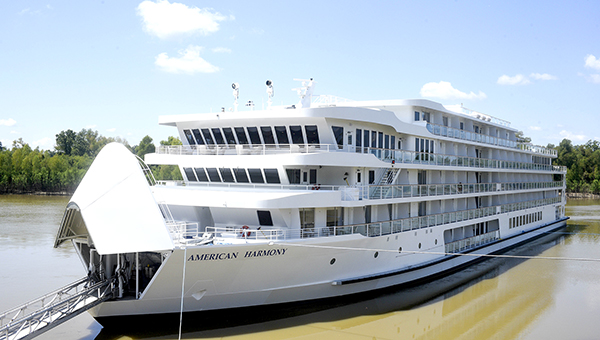 The American Harmony, one of the riverboats in American Cruise Lines fleet of ships that navigate the Mississippi River, docks at Vicksburg’s riverfront in August 2019.

A second riverboat cruise line has leased waterfront property from the city.

The Board of Mayor and Aldermen Wednesday approved a 20-year lease with American Cruise Lines Inc. involving about 500 feet waterfront along the Yazoo Diversion Canal from the Yazoo & Mississippi Valley Railroad Depot on Levee Street south to the China Street flood gate.

The site is just south of property leased by Viking Cruise Lines.

“This is the second lease agreement we’ve gotten from a cruise line coming to Vicksburg, which is going to greatly improve the waterfront at no cost to the city,” Mayor George Flaggs said. “This is a game-changer.”

He said the city plans to clear the waterfront property along North Washington Street “and make the waterfront a lot more appealing to visitors. I want to commend American Cruise Line and Viking for being the first two (companies to lease property).”

“We’re so excited that has been completed and it will add to our riverfront,” Laura Beth Strickland, executive director of Visit Vicksburg said of the lease. “We’re just looking forward to more partnerships with these companies and making our downtown as vibrant for visitors as possible.”

The American Cruise Line lease comes about nine days after the city approved a lease with Viking Cruise Lines.

Viking is leasing a 600-foot section of Vicksburg’s riverfront along the Yazoo Diversion Canal to build a facility for its cruise boats expected to dock at the city in 2022.