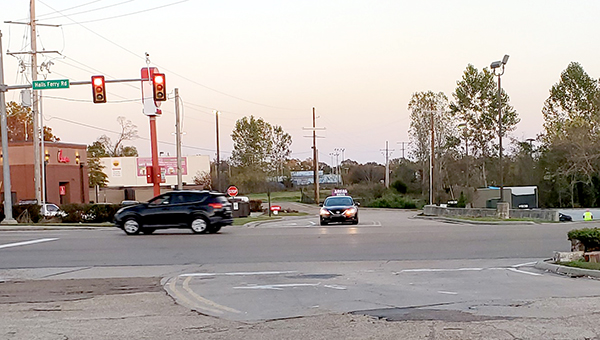 City leaders moved forward Wednesday with plans to bid out the project that would extend the road between Chick-fil-A and Starbuck's into Halls Ferry Park. (John Surratt/The Vicksburg Post)

The Board of Mayor and Aldermen has taken another step toward building an alternate route to Halls Ferry Park.

The board Wednesday authorized City Clerk Walter Osborne to advertise for bids to build what is being called the “Halls Ferry Park Road Extension.” In August, the board approved a $14,000 contract with Allen & Hoshall Engineers of Jackson to design the project.

City officials acquired the right of way to extend the road, which is south of the Halls Ferry/Pemberton Square Boulevard intersection. Under the agreement with the city, the engineers will design an asphalt road to the park and also enlarge the entrance to Fire Station Number 8.

South Ward Alderman Alex Monsour, who is over the city’s recreation department, said when the city hired the engineers that the extension will intersect with Halls Ferry Park Road at the site of the park’s pickleball courts to provide more access to facilities.