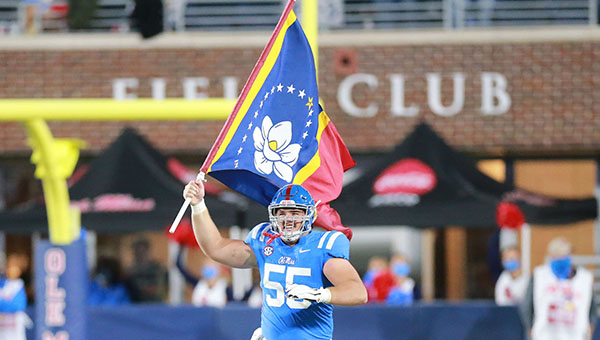 Ole Miss center Ben Brown carries the new Mississippi State flag onto the field before a game against South Carolina. The former St. Aloysius star will make his 32nd consecutive start for the Rebels when they play Mississippi State in the Egg Bowl on Saturday. (Thomas Wells/Ole Miss Athletics)

In two full seasons and most of a third in the middle of Ole Miss’ offensive line, Ben Brown has seen a lot. He’s been through the program’s highs and lows, been on the right side of some big wins and the bad side of some infamous losses. He’s endured a head coaching change and a position change.

The former St. Aloysius star and Vicksburg native, who is a third-generation Rebel, has always maintained his enthusiasm and smile through it all. This year, it’s just a little easier to show it.

Ole Miss (3-4) is ranked No. 4 in the country and first in the Southeastern Conference in total offense, at 564.9 yards per game, heading into Saturday’s Egg Bowl showdown against Mississippi State (2-5). The Rebels have posted 500 yards or more four times, and 50 points or more three times in seven games.

Although the results haven’t always gone their way, Brown said it’s been fun to be a part of such an explosive unit.

“It’s been a whole lot of fun. It’s been a really exciting year. I think everyone is locked in, and I think everyone is having fun out there just playing football, scoring a lot of points, making a lot of yards and first downs,” Brown said. “It’s been exciting, and I think that excitement really brings us confidence and some kind of juice. We know that we can score, and we know that we can put up yards, and that’s what we do.”

Brown has, quite literally, been at the center of the Rebels’ surge. The junior has started every game of his college career, and the Egg Bowl will be his 32nd consecutive start. He played right guard as a freshman, split time between guard and center last season, and has moved full-time to center this year.

Brown said the new position has more responsibility — the center’s duties include making pre-snap blocking assignments and calling out defensive adjustments — but he feels he’s handled it well.

Brown will start his third Egg Bowl on Saturday. He has yet to win one. The Rebels have lost twice in a row. They have only lost three in a row twice since the Golden Egg trophy was introduced to the rivalry series in 1927, from 2009-11 and 1939-42.

Ole Miss has goals beyond reclaiming the Golden Egg. A win Saturday would be its third in a row, and put it in a position to finish with a winning record by beating LSU in next week’s season finale. A bowl berth is also a possibility.

Brown said with so much at stake, the Rebels are trying to treat this like any other game — even though everyone involved knows that’s far from the case.