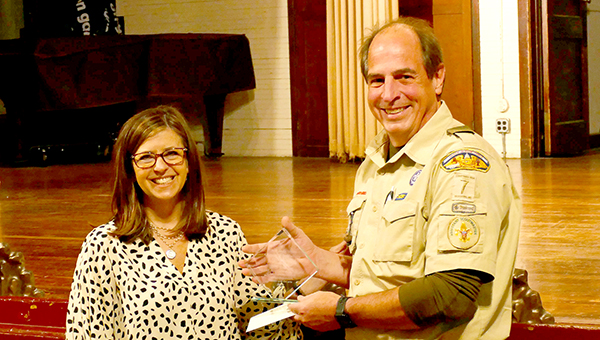 The late Landy Teller was an advocate for the Southern Cultural Heritage Foundation.

From the very beginning when it was only a vision to turn a block of old buildings into a cultural center, Nancy Bell, who serves as the president of SCHF Board said, “He was a rock.”

And it is because of his dedication to the Southern Cultural Heritage Foundation that in 2016 an anonymous gift was made in his memory.

“This gift was meant to start an endowment that would fund an award to be presented to an individual who contributes to culture and the arts in Vicksburg,” SCHF Executive Director Stacey Mahoney said.

Earlier this month, during the Southern Cultural Heritage Foundation’s November board meeting, the Landy Teller Champion for Culture & the Arts Award was presented to David Clement.

“I feel honored to have received this award from the Southern Cultural Heritage Foundation,” Clement said.

Mahoney said Clement, who is a restoration architect, has dedicated much of his time and knowledge to helping refurbish the Cultural Center, which consists of five buildings listed on the National Register of Historic Places. The entire complex is designated a Mississippi Landmark.

“David has been vital in many of our restoration projects here at SCHC for many years,” Mahoney said. “He has prepared drawings and plans for many of the projects made possible through grants from the Mississippi Department of Archives and History, which have included the Cobb House restoration, the auditorium interior and exterior renovations, the SCHC roof project and most recently the convent exterior rehabilitation project.”

“My professional career has always been historic preservation and I have always viewed preservation and restoration as the ultimate in recycling,” Clement said. “If you can find something that is old and doesn’t quite meet the needs of what we need today, rather than tear it down, I look to what can be done to change it to make it more useful and meet the needs of modern society.”

“It has been an honor and fun to work with the Cultural Center,” Clement said. “And it has also been rewarding to make sure those buildings are around for many more years to come so more people can enjoy them whether they go inside them or just drive past them on the street.”