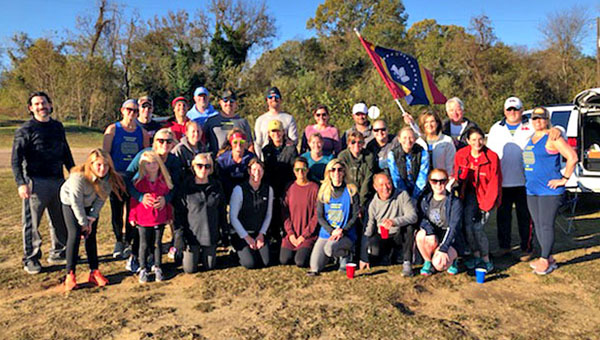 Runners who participated in the Annual Turkey Run in the Vicksburg National Military Park pose for a photo Thursday morning. A loose group of about two dozen people gathers each Thanksgiving to run a 6.354-kilometer course through part of the Park. (Submitted to The Vicksburg Post)

Runners gather for a lighthearted Thanksgiving Day run in the park

Every Thanksgiving morning, before the turkey goes in the oven, the green bean casserole is prepared and the first football game is turned on, a group of friends gathers for a solemn tradition.

OK, it’s not that solemn. In fact, everything about it is intended to be a little silly. And it’s a recent tradition, only seven years old, but it’s a tradition nonetheless.

For the seventh year in a row, about two dozen local runners came together just after sunrise Thursday for the Annual Turkey Run in the Vicksburg National Military Park. They navigated a 6.354-kilometer course in a lighthearted romp through the Flats section of the Vicksburg National Military Park and, although they take running seriously, this is always more about having fun.

“It’s not real serious at all. It’s fun to begin the day with some exercise and fellowship with your friends on the holiday,” said Lauren Coulon, one of the run’s founders. “You never know who’s going to be there. When I think of Thanksgiving, this is my favorite thing. It’s so different and so much fun to spend it with the people I like.”

Coulon, Annette Kirklin and Katie Ferrell started the Turkey Run in 2014 after participating in a boot camp together. They became fast friends and, with Thanksgiving approaching, decided to set another goal.

“We were trying to run and train and we were all becoming really good friends. Then we said, ‘Why don’t we do our own turkey run?’” Kirklin said.

And, just like that, a new tradition was born — with a twist.

Unlike its more organized cousins, the Annual Turkey Run in the Vicksburg National Military Park has been akin to an “anti-10K” from the start. The odd distance of 6.354 kilometers, which works out to just short of four miles, was chosen at random.

“We wanted to make it a little harder. A 5K is easy. Not everybody can do a 6.354K,” Kirklin laughed.
The group prints up T-shirts for each year’s run, and the “sponsors” are the names of those who ordered shirts.

No official times are kept, although winners do get chocolate medals that Coulon buys at the Rocky Mountain Chocolate Factory.

“The shirt and awards are why I do it. But I’ve never won an award, which is why I make them,” Coulon said with a laugh.

Anyone who shows up at the race checks in at a registration table that is actually an old ironing board owned by Ferrell. This year, it also was used as a snack table.

“Katie was moving to Eagle Lake and she happened to have an ironing board in her car,” Coulon said. “I think this is the only time it ever gets used.”

For a couple of years Coulon, Kirklin and Ferrell were alone on their Thanksgiving Day run. Then they started posting pictures on Facebook and friends and family took interest. The event soon swelled to as many as 30 people, some of whom live in Vicksburg and some who participate while visiting for the holiday. Some run, some walk, and all have a bit of fun before the Thanksgiving festivities begin in earnest.

“My mom used to come to all the races to watch, and now she walks it. It’s something fun we can all do together besides eat,” Coulon said. “Each year the crowd is different. Sometimes it’s people you see once a year. I love that my family is there and I see people I haven’t seen in a while.”

As it turned 7 years old Thursday, the group’s founders have no plans to end the Turkey Run’s hallowed place on their personal running calendars. It has become a tradition as treasured as turkey, as fun as football, as much a family gathering as Thanksgiving dinner.

“This event has evolved from an idea to a tradition,” Ferrell said. “Friends are so important, especially in times like these, and it’s a great way to celebrate Thanksgiving, our health and love for one another.”