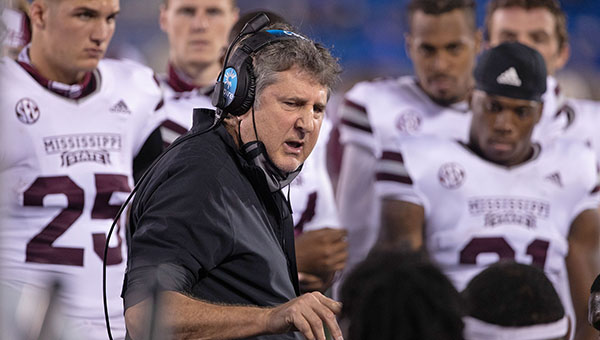 JACKSON (AP) — Mike Leach and Lane Kiffin have brought sound bites and plenty of passing to Mississippi State and Ole Miss, if not yet wins.

But the two outspoken new Southeastern Conference coaches with impressive offensive pedigrees finally get to match wits — and talent — in Saturday’s Egg Bowl, which was shuffled back from Thanksgiving Day under the revamped league-only schedule.

“I know it’s very meaningful to people and I know that it’s in conversation all year round,” the Bulldogs’ Leach said. “Every day. There’s not a day that I don’t hear somebody mention the Egg Bowl. So, I know it’s a very meaningful game.

”I also know that there’s been plenty of them that were exciting to watch, long before I was ever in the state of Mississippi.”

That certainly includes last season when Mississippi State (2-5 SEC) won 21-20. It was a game that might have gone to overtime but for a missed extra point in the final seconds that was pushed back by an unsportsmanlike conduct penalty by star wide receiver Elijah Moore of the Rebels (3-4).

The game two years ago was marred by a fight that led to four ejections in the second half as the Bulldogs romped 35-3.

“We both have to manage our teams,” Kiffin said. “We’ll talk a lot to our team as we get closer to the game about playing with great composure.”

Both programs remain very much works in progress, especially with their first seasons played during a pandemic.

Despite going 0-4 in October and losing four of five, Mississippi State hung in there with No. 13 Georgia before losing 31-24. The Bulldogs still have a chance to avoid a losing record.

Freshman quarterback Will Rogers served up a reminder of how potent the Air Raid offense can be against Georgia, posting career highs of 41 completions on 52 attempts for 336 yards passing and a touchdown. It was the second-highest passing yardage total of the season for the Bulldogs. The highest was in the opener, when K.J. Costello set the SEC’s single-game yardage record with 623 in a 44-24 win over LSU.

“I don’t think we’ve hit our potential yet,” said Leach, who made a splashy offensive debut in a win over defending national champion LSU. “We’re a group that we’re young enough that we’re definitely going to change to the positive.”