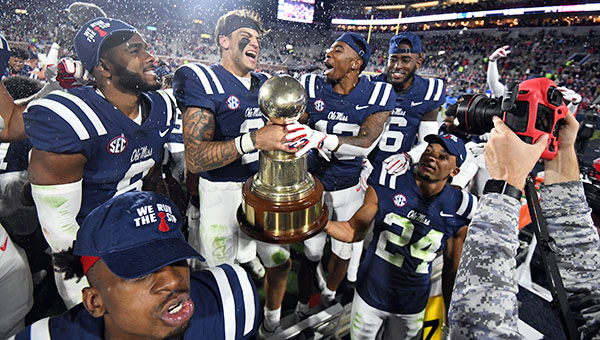 OXFORD (AP) — Matt Corral threw for two touchdowns as Ole Miss raced to a 14-0 first quarter lead and held off a late Mississippi State surge Saturday to defeat the Bulldogs 31-24 in the Egg Bowl rivalry.

Ole Miss (4-4) snapped a two-game losing streak in the rivalry, erasing last year’s painful one-point loss after Elijah Moore drew an unsportsmanlike conduct penalty in the end zone, pushing back a PAT that failed in the final seconds.

“Last year is in the past. We got the Egg (Bowl trophy). That’s all that matters,” Moore said. “It’s a blessing. I didn’t think about last year. I just played the game today and I can’t thank God enough.

Saturday, Moore responded with 12 receptions for 139 yards, including four catches to convert on third and fourth downs. Moore entered the game leading the nation in receptions (10.6 per game) and yardage (159.3).

Corral was 24-of-36 passing for 385 yards, with touchdowns of 81 yards to Braylon Sanders and 48 yards to Dontario Drummond as Ole Miss built a 21-7 second quarter lead and never trailed. Snoop Conner and Jerrion Ealy added touchdown runs of 1 and 8 yards, respectively.

Freshman Will Rogers threw three touchdown passes for Mississippi State (2-6), including 6 and 11 yards to Malik Heath. Rogers finished 45-of-61 passing for 440 yards and pulled the Bulldogs within 24-21 on a 7-yard strike to Austin Williams in the fourth quarter.

Rogers directed Mississippi State to an opportunity on the final play from the Ole Miss 36-yard line, lofting a pass to the end zone that was knocked down by A.J. Finley.

“I was proud of our effort and the way that we finished,” Mississippi State coach Mike Leach said. “We just have to keep scratching and clawing.”

COLUMBIA, Mo. (AP) — Sarah Fuller was playing around with a teammate a couple months ago when she kicked a... read more