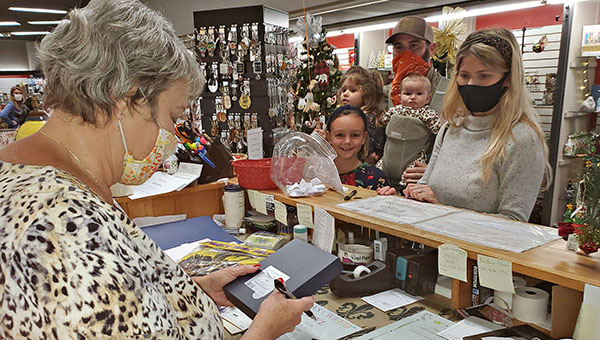 Main Street Vicksburg’s “Shop Small” program Saturday was developed to encourage area residents to visit and shop the stores along Washington Street as a way to support the downtown area’s small business owners, and several owners reported plenty of activity.

“We’ve had people come in and say they were here for Shop Small and they wanted to support the local businesses and we appreciate that,” said Norma Massey, owner of Fredericks, a shoe store that is approaching its 70th year in business.

“We’ve had our struggles in 2020,” Massey said. “We had to close in March and April but we would help people if they needed something, either opening the store for them or making deliveries. It’s good to see people coming downtown.”

Massey’s parents opened Frederick’s in 1950 and the store has remained a landmark downtown. She said the store has stayed open thanks to a loyal customer base and history of service.

“For many families it’s a tradition to get their children’s baby shoes here,” she said.

Further South on Washington Street the sounds of Elvis Presley singing “Blue Christmas” came from a speaker outside Michel’s Record Shop, which has been a downtown landmark since 1962.

Business Saturday “has been OK,” she said. “I’ve had people coming in and shopping and I’ve enjoyed visiting with them. It feels good. I’ve been doing well even with the virus going on.

“I have some good customers and today I had people come in from Jackson, Madison, the Delta and Delhi, La. I have my regulars but I love to see new faces.”

Mary Helen Welch, owner of Paper Plus, said business was steady Saturday. She hoped it would be a boost in the wake of the effects from restrictions imposed to slow the spread of the COVID-19 virus.

“Today’s been good,” Welch said. “The year has been tough. I was hoping yesterday (Friday) would be good but the rain kept everybody away.”

Welch has owned Paper Plus for seven years.

“I was ready for a change,” Welch said for her reason for her career change. When she heard former owner Alice Hebler was selling the business, she said, “I made the change.  Now, if I work 12 hours a day I’m doing it for myself and not somebody else. I’m loving every minute.”