Four Down Territory: Airing it out at the Egg Bowl, MHSAA championship games set, and the Broncos had no QB 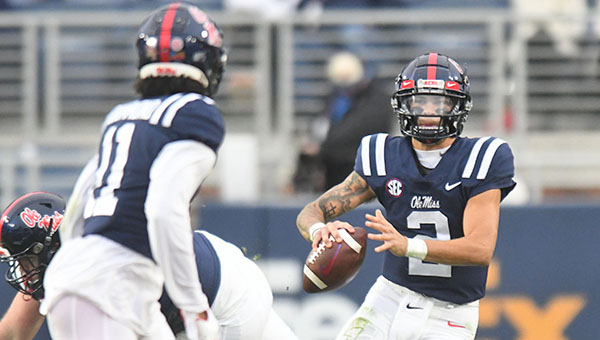 You’re in Four Down Territory. Here, we break down four notes, nuggets stats and trends from the weekend that was in Mississippi high school football, college football and the NFL.

1
The final score of the 2020 Egg Bowl, a 31-24 victory for Ole Miss, was relatively modest for a game in which both teams posted big numbers through the air.

Both Ole Miss quarterback Matt Corral and his Mississippi State counterpart Will Rogers set school records for passing yards in the rivalry game.

Corral was 24-of-36 for 385 yards and two touchdowns. The yardage total was the most ever for an Ole Miss quarterback against the Bulldogs, besting the 334 yards Mark Young had in the 1988 Egg Bowl.

Rogers’ 45 completions were a single-game school record as well, and it ranks second in Southeastern Conference history. Kentucky’s Tim Couch had 47 completions against Arkansas in 1998. Rogers is the first Mississippi State quarterback to have 30 or more completions in three consecutive games.

With so many passes being thrown, it made sense that the receivers for both teams got in on the records as well. Mississippi State’s Jaden Walley caught nine passes for 176 yards, which is the second-highest total for a Bulldog in the rivalry game. David Smith had 194 yards in 1969.

On the Ole Miss side, Elijah Moore finished with 12 receptions for 139 yards. His reception total was an Ole Miss Egg Bowl record, and also gave him the school’s single-season record. Moore has 86 receptions this season, one more than A.J. Brown had in 2018.

2
The old guard stood tall during the semifinals of the Mississippi High School Activities Association playoffs on Friday night.

Seven of the 12 teams that advanced to their classification’s championship games will be back for the second year in a row. Three of them — Oxford in Class 6A, West Point in 5A and Taylorsville in 2A — are trying to repeat as state champions, while Oak Grove in Class 6A, Poplarville in 4A, Noxubee County in 3A and Lumberton in 1A will look to avenge losses in last year’s title games.

Two other teams — West Jones in 5A and Louisville in 4A — played in the 2018 championship game. Calhoun City was last in the 2A title game in 2016.

Only Biggersville, which is making its first Class 1A championship game appearance, and Magee, which is there for the first time since 2000, are strangers to the state finals.

The championship games are set for Friday and Saturday, Dec. 4 and 5, at Mississippi Veterans Memorial Stadium in Jackson. The Class 3A, 1A and 6A games will be played Friday, while Class 4A, 2A and 5A play Saturday.

Oxford also has the longest active winning streak in the MHSAA, at 25 games. Only it, Oak Grove, Biggersville (13-0) and Magee (11-0) are entering the championship round undefeated.

3
Penn State defeated Michigan 27-17 on Saturday for its first win of the season, but it had already continued a long-running trend among the nation’s college football teams.

Penn State’s 1-5 record ensured at least one team ranked in the Top 10 of the Associated Press preseason poll that will finish with four or more losses for the 14th consecutive season. The Nittany Lions entered the season ranked No. 7.

LSU’s 20-7 loss to Texas A&M later Saturday put it on the list as well. The defending national champion Tigers started off ranked No. 6 and currently have a 3-4 record.

The last time all 10 teams in the preseason Top 10 finished with three losses or less was in 2006. Since then, 22 teams have started off among the nation’s elite and stumbled to underwhelming seasons. Thirteen of the 22 started the season ranked either No. 7 or No. 8.

LSU and Southern California lead the list of infamy with three appearances each. Auburn, Texas A&M and Michigan have each done it twice.

4
The Denver Broncos faced one of the most bizarre situations in recent NFL history Sunday when they had to play the New Orleans Saints without a true quarterback on the roster.

All four quarterbacks on the roster — starter Drew Lock, and backups Brett Rypien, Jeff Driskel and Blake Bortles — were all prohibited from playing because of COVID-19 concerns. That forced the Broncos to promote rookie wide receiver Kendall Hinton from the practice squad and put him behind center.

Hinton had played quarterback in college at Wake Forest, but not in the NFL. He completed 1 of 9 passes for 13 yards, with no touchdowns and two interceptions, as the Saints routed the Broncos 31-3.

It was the first time since 1998 that a quarterback has finished a game with more interceptions than completions. The Chargers’ Ryan Leaf was 1-of-15 with four interceptions in a 23-7 loss to Kansas City on Sept. 20, 1998.

The Broncos (4-7) also sprinkled in some wildcat snaps to running backs Royce Freeman and Phillip Lindsay, but only finished with 100 rushing yards and six first downs. The Saints set an NFL record by not allowing a 100-yard rusher for the 54th consecutive game.

“He did everything he could,” Broncos coach Vic Fangio said of Hinton. “That was a big, big ask.”

The Saints snapped a five-game losing streak to the Broncos that stretched back to 1994. They are now just 3-9 all-time against Denver.

Head coach Sean Payton also became the 13th head coach in NFL history to beat at least 31 teams. Payton, who has been with the Saints since 2006, has never coached another team and has beaten every other current NFL franchise at least once.